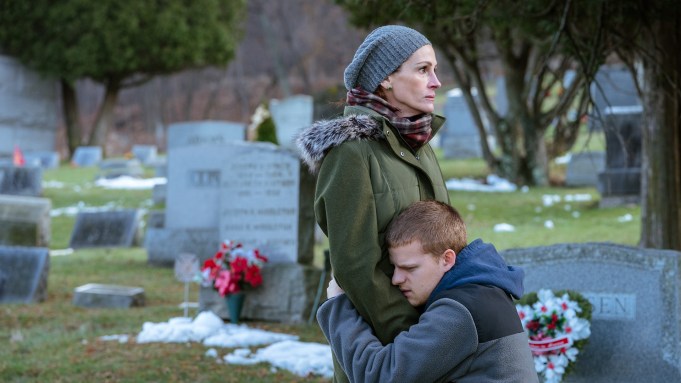 Every now and then several movies come along the same basic premise, and that is the case with a slew of films premiering at the Toronto International Film Festival, all in the past 24 hours,  that deal with efforts of parents to change the course of their son’s life, and all of them happen to start with a ‘B’.  We have had Boy Erased in which parents played by Russell Crowe and Nicole Kidman put their kid, played by Lucas Hedges, in a gay conversion therapy camp. Last night brought the premiere of Beautiful Boy in which Steve Carell tries to save son Timothee Chalamet from life threatening Crystal Meth addiction. And tonight brings the World Premiere of Ben Is Back in which Julia Roberts plays a mother desperately trying to save son Lucas Hedges (again) from a downward spiral into drugs.  All of these films, I am happy to report, are welcome and worthwhile with much to say. However, in addition to having a strong anti-drug message Ben Is Back, as I say in my video review (click the link above to watch) , turns out to be not only a riveting and powerful film that kept me on the edge of my seat, but also a tremendously effective film about a family in crisis when their son shows up one Christmas Eve and all hell breaks loose. It also happens to contain Roberts’ finest dramatic performance since her Oscar winning turn in Erin Brockovich 18 years ago. She could well find herself back in contention , and deservedly so, for this heartbreaking and fiercely determined role as a mother willing to do anything to bring her son back from the abyss. Lucas Hedges could also find himself back in the Oscar conversation after first being nominated just two years ago for Manchester By The Sea. Between this film and Boy Erased (opening a month earlier) he proves beyond a doubt that he has the chops.

The film was sharply directed and written by Peter Hedges , who also happens to be the father of the film’s young male lead. It all takes place one Christmas Eve in a snowy east coast suburb where Ben Burns (Hedges) suddenly turns up outside his family’s house after apparently being away for a long period of time.  His drug addiction problems , and the toll it has taken on everyone, is slowly revealed as the director’s beautifully wrought screenplay plays out this simmering drama.  Holly (Roberts) is the one person overwhelmingly glad to see him and welcomes her son with open arms.  Sister Ivy ( Kathryn Newton) is wary from the start, clearly aware of a rocky relationship in the past and of the fractures he has brought to their lives.  Most cynical and unwelcoming is Ben’s stepdad  Neal (Courtney B. Vance) who wants nothing to do with him , and warns his wife that this surprise visit will not only ruin Christmas , but also lead to trouble. He’s not wrong about that  as we see events unfold and family secrets revealed, mostly Ben’s, which build to a crescendo when their pet dog goes missing and Ben suspects the culprit could be someone from a past drug deal. To say more about where all this heads would be to deny the audience of discovery in this rich drama which first and foremost is all about family in crisis.

The acting could not be better, even if the show belongs to Roberts and Hedges who are pitch perfect together , never striking a false note in demonstrating the everlasting bond between a mother and son , even under the most trying of circumstances. As the film continues , their scenes together take on the beats of a suspense thriller but never feels like it has all been made up for the sake of a story. The ending also thankfully never cops out to movie convention. Among the supporting cast, Newton is excellent, and special props to David Zaldivar , a friend of Ben’s named Spencer whose sunken face reveals he has lost the fight to drugs.

Hedges produced along with Nina Jacobson, Teddy Schwarzman, and Brad Simpson. Roadside Attractions will release the film on December 7th, perfectly timed to the holiday season in which it is set.

Do you plan to see Ben Is Back? Let us know what you think.