Continue to Deadline SKIP AD
You will be redirected back to your article in seconds
Skip to main content
October 14, 2020 11:58am 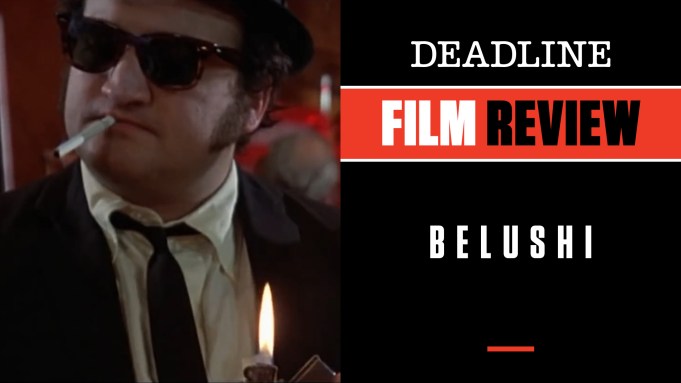 R.J. Cutler has had his hand in a number of fascinating documentaries such as War Room, The World According to Dick Cheney and his current Apple series Dear…, among many others. For me the most eye-opening of his works was the 2015 docu Listen to Me Marlon, which was composed entirely from lost audio tapes of Marlon Brando simply talking about everything. His latest, Belushi, a linear exploration of the life of the famed comic actor John Belushi, takes that approach even further, and I have to say it works brilliantly in telling of an all-too-well-known tale of when fame hits you hard. The sad downfall of Belushi, who died of a heroin and cocaine overdose in a Chateau Marmont hotel room in 1982 at just 33 years old, is well documented in many mediums including books and the narrative film Wired, to name a few, but Cutler has much more in mind here in painting the portrait of a unique talent whose life eventually became overwhelmed by his tragic addictions.

To do this, he needed the help of Belushi’s widow, Judy, and boy did he ever get it. After resisting overtures from producer John Battsek for more than a decade, Judy finally decided the time was right to cooperate for a documentary project, especially after seeing Cutler’s Brando film. What the filmmakers weren’t counting on in all those years of trying was that Judy secretly had compiled an oral history to honor her late husband that included 50 hours of interviews she conducted with those who knew and loved him. Those tapes, along with heartbreaking and poignant letters John had written to Judy over the years, make up the heart of this film as the story of John Belushi is told by the likes of Dan Aykroyd, Gilda Radner, Chevy Chase, Ivan Reitman, Carrie Fisher, Lorne Michaels, Harold Ramis, brother Jim Belushi and many more. Cutler also interweaves interview footage of John from numerous appearances, but the real insights come from his letters and those who crossed his path.

Cutler basically starts from the beginning, with the clever device of animation segments by Oscar-nominated animation director Robert Valley that illustrate the actor’s early life growing up in Illinois as the son of Albanian immigrants through his eventual discovery of improv acting talents in school and then a revelation with Chicago’s Second City, where he would become a leading star. That led to the Off Broadway show National Lampoon’s Lemmings, which featured a number of talents who would go on to do the radio version and finally Saturday Night Live in 1975, a move Belushi resisted since he thought TV was a cop out. The SNL part of the tale is nicely re-created here, and Cutler is generous with clips showing the star turns of Belushi including the “Cheeseburga” guy (said to be based heavily on his father), Samurai Futaba, and of course Jake Blues and the whole Blues Brothers phenomenon that would stretch from TV success to concerts and chart-topping album triumphs to a couple of feature films.

His very close personal relationship with Aykroyd also is played out in Belushi, all the way to the lifelong regrets Aykroyd had in not getting to the Chateau in time to save his friend from himself. There also is much to talk about with his John “Bluto” Blutarsky from his first big movie hit, 1978’s Animal House, as well as others in his short movie stardom including Steven Spielberg’s 1941, Continental Divide and particularly the making of Neighbors with Aykroyd — a shoot where Belushi’s demons clearly were taking their toll. Among those interviewed, some of them now gone themselves, Fisher’s understanding of the inner turmoil and the toll of the drugs is particularly enlightening, as she talks about the year he was sober and she and then-boyfriend Aykroyd and John and Judy would spend idyllic weeks on Martha’s Vineyard.

If you think you know the John Belushi story, you probably do. The combination of fame and drugs has toppled many shooting stars, and this tale has that in common. However, Belushi is much bigger than that, and by the end of it we are left more with sadness about what was lost and what might have come in the 38 years Belushi has been gone from this planet. This film shows the talent and the man behind it, and it also shows a beautiful love story that still lives on though Judy’s cultivation of his legacy in an effort to make sure this bright light — and all the things we loved about him — never is forgotten.

Cutler, Battsek, Diane Becker and Trevor Smith are producers. The film premieres tonight at the Chicago Film Festival and screens Saturday at the AFI Fest. It will premiere November 22 on Showtime. Check out my video review with scenes from the film at the link above.

Do you plan to see Belushi? Let us know what you think.