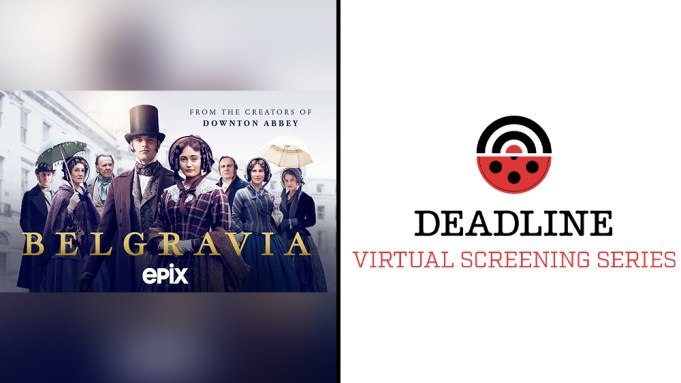 “Although I had adapted other things, I had adapted other people’s novels and so on, but I had never adapted my own work, so that seemed quite an original challenge,” Belgravia writer and creator Julian Fellowes said of bringing his 2016 novel of British high society to the small screen.

Joined by series star Tamsin Greig and executive producer Gareth Neame, the Downton Abbey overlord chatted with me last night for our Deadline Virtual Screening of the Epix drama, which debuted on this side of the Atlantic on April 12.

Now, of course, our chat comes as the John Alexander-directed limited series about aristocracy amidst the vast social shifts of Victorian England is on the near eve of its finale Sunday. No spoilers as you watch the video of parts of our remote Belgravia panel above, but there are no spoilers. (Well, unless you live in the UK, where the series starring Greig, Harriet Walter, Alice Eve, Tom Wilkinson, Adam James, Ella Purnell, Philip Glenister, Richard Goulding, Saskia Reeves, Paul Ritter, Jack Bardoe, Tara Fitzgerald, Bronagh Gallagher, James Fleet and Emily Reid wrapped April 19 on ITV – then you know how the mystery of Charles Pope ends.)

Otherwise, welcome to a little bit of behind the scenes of Belgravia.

Hope you enjoy. Stay safe, wear a mask and hope to see you at our next screening series, virtual or not.