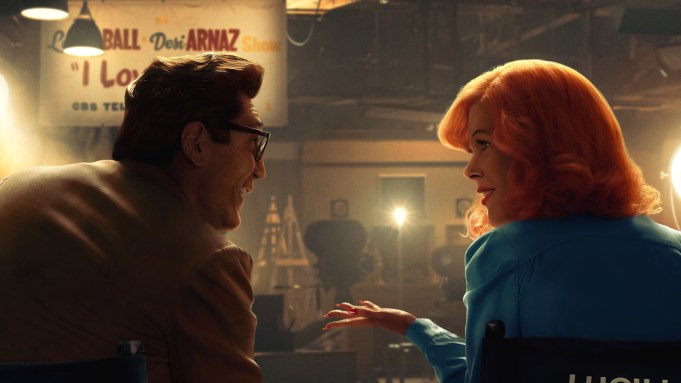 Amazon Studios is giving the first extended look at Nicole Kidman’s Lucille Ball and Javier Bardem’s Desi Arnaz in the new trailer for Being the Ricardos, writer-director Aaron Sorkin’s peek behind the scenes of TV’s pioneering sitcom I Love Lucy.

In the trailer, Ball and Arnaz are depicted at one of the couple’s many pivotal moments: This time, it’s the House Un-American Activities Committee’s investigation into Ball’s early ties to the Communist Party. (An earlier teaser trailer featured just a quick in-character glimpse of a grape-stomping Kidman.)

“We’ve been through worse than this,” Bardem’s Arnaz assures his wife. “We have?,” replies Kidman’s Ball in a throaty voice and with the perfect comic timing that would make Lucy a legend.

The trailer also unveils J.K. Simmons as William Frawley and Nina Arianda as Vivian Vance, and features a tense scene on the Lucy set as Ball makes her first appearance following news of the FBI investigation.

In addition to Kidman, Bardem, Simmons and Arianda, Being the Ricardos features Jake Lacy, Tony Hale and Alia Shawkat.

Amazon Studio’s Being the Ricardos opens in theaters Dec. 10, and premieres on Amazon Prime Video Dec. 21.