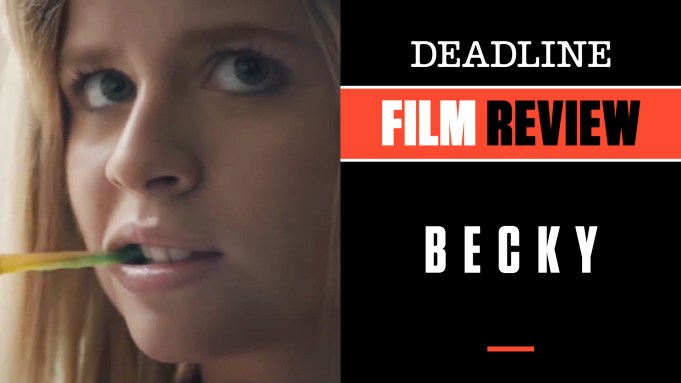 Let’s just get real. In another era, Becky, the new blood-soaked home-invasion thriller, would likely land on the bottom half of a double bill, a “B” movie throwback updated with extreme violence for hard-core fans who like to see faces flattened and eyes pop out. On its own terms it is perversely entertaining if this is your bag, but don’t mistake that with being any good. Directors  Cary Murnion and Jonathan Milott, along with their team of credited writers (Ruckus Skye, Land Skye and Nick Morris — apparently it took three to cook this familiar stew) are purely interested in visceral shocks, at least once the inevitable carnage starts rolling.

I have heard some compare all this to a hard R-rated version of Home Alone, which pitted Macaulay Culkin against a bunch of bumbling bad guys. But here a young teen named Becky (Annabelle: Creation’s Lulu Wilson) isn’t really “home alone,” and these neo-Nazi escaped convicts don’t exist as the target for laughs even though their leader Dominick  is a swastika-tatted Kevin James, which might make one suspect the veteran comedy star of Paul Blart: Mall Cop and The King of Queens is cast for laughs. However, this definitely is meant to be a change-of-pace role as he leads a group of creepily inept prisoners (Robert Maillet, Ryan McDonald, James McDougall) in battle against a determined young girl who could apparently give Rambo lessons in makeshift warfare. Still grieving over the loss of her mom, Becky is taken by dad Jeff (Joel McHale) for a family weekend at their lakeside getaway where he hopes Becky will bond with his fiancée Kayla (Amanda Brugel) and her young son (Isaiah Rockcliffe). Becky wants none of it and would rather spend time with her rescue dogs Diego and Dora. (Animal fans beware: One of these animals gets the hook, while the other looks like he lost the audition for Once Upon a Time in Hollywood.)

Anyway, the home is invaded by a group of prison escapees who we soon learn are there to retrieve a mysterious key that supposedly will unlock everything they have dreamed up during their stint in the Big House. It is never explained exactly what it opens, but Becky becomes suspect No. 1 as they rampage the house and hold the others hostage. Becky, meanwhile, had already retreated to her treehouse with one of the dogs, sulking about her whole family situation. Turns out it is good she was apart from the others as it positions her nicely to set a course to do away with the four scarily imposing criminals for which she luckily has methods to scrappily outwit. It is fortunate that one of them actually has a heart and goes against the orders of Dominick at a choice moment — a convenient plot device that makes Becky’s revenge a little easier to accomplish. Man, she’s good. And so is Wilson, the capable young star who plays her with a straight face and real grit. The others, including James, are strictly one dimensional with underwritten roles and stereotypical dialogue for this kind of movie.

Murnion and Milott raise the stakes and try to overcome the by-the-numbers plotting by going all gross-out on us, particularly in a scene where Dominick performs his own eye surgery, and another involving a decapitation and sports vehicle facial just to rub it in so to speak. Give these helmers credit for some inventive gore, especially in a thriller genre piece like this, which doesn’t fall into the horror category. James’ unexpected turn as the King of Goons is the calling card that may attract VOD eyeballs (at least those that are attached) when this premieres Friday on digital platforms, but it is Wilson that earns the plaudits for somehow making the completely implausible at least mildly plausible. Well, not really, but she brings what little credibility this exercise in dehumanizing terror has, and what little reason otherwise there might be to sit through it.

By my count there are at least 28 credited producers of one use of the title or another. Apparently it takes a village. Quiver Distribution is the releasing entity along with Redbox Entertainment, the newly formed original film subsidiary of Redbox, which has about 41,000 DVD kiosks planted in grocery stores and other locations making it easy to soon be taking Becky home with Kellogg’s Corn Flakes.

Check out my video review above with scenes from the movie. Do you plan to see Becky? Let us know what you think.