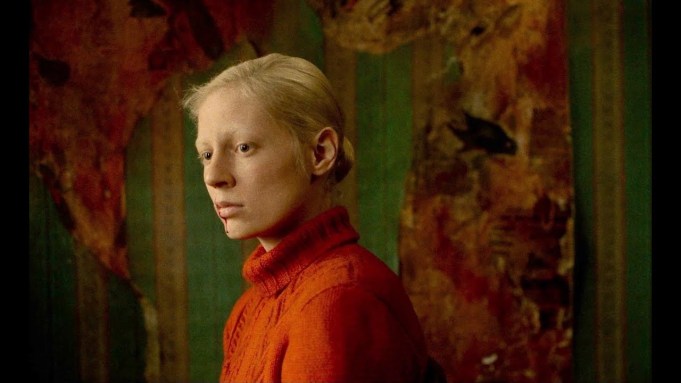 Roger Deakins with his one continuous take in 1917 is a likely shoo-in in Oscar’s DP category, but we can’t overlook Kantemir Balagov’s post WWII Leningrad feature Beanpole, which is infused with bright orange, red, and green colors; an interesting palette when we typically expect such hard depressed times to be displayed in blacks, whites and grays.

Beanpole follows two nurses in a city that’s trying to rebuild following great devastation. You can see the strain of the war in Ilya’s tall, lanky body (Viktoria Miroshnichenko). Meanwhile, her friend, the more optimistic Masha (Vasilisa Perelygina), can no longer bear a child. She looks to Ilya to deliver after Masha cruelly loses a child (which we won’t spoil for you here). Masha’s meets a rich young suitor, and the film builds toward an intense clash between her and his parents as we get a clear sense of the haves and have nots in the fallout of war.

“It should be a black and white film,” Balagov told me at a recent Awardsline screening about how he was visually inspired by the Dutch impressionists, “but as we made research of personal diaries (during the war), I found people trying to escape their reality with the help of colors.” Kseniya Sereda was Beanpole‘s DP.

Another reason for the brilliant color spectrum in the film, “Ilya has PTSD, and maybe a person with that sees the world like this. I wanted my characters to look decent in the frame because I knew the amount of suffering in the film. Without this color palette, I think my characters would think that I’m enjoying their suffering and I didn’t want that,” adds the filmmaker who found inspiration of the plight of women in post WWII Leningrad in Nobel Laureate Svetlana Alexievich book, The Unwomanly Face of War.

Beanpole made its world premiere in Un Certain Regard at the Cannes Film Festival, where Balagov won best director. The pic is Russia’s submission for best international feature film at the 2020 Oscars. Beanpole was produced by Alexander Rodnyansky, who was Oscar nominated for Andrey Zvyangintsev’s Loveless and Leviathan.