Continue to Deadline SKIP AD
You will be redirected back to your article in seconds
Skip to main content
August 12, 2020 6:29pm
2Comments 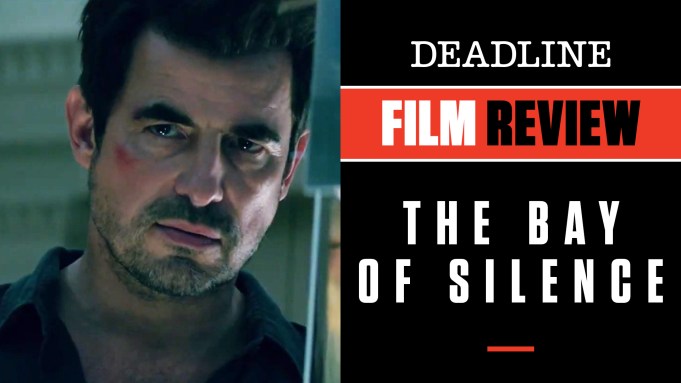 The cast is the thing with the new adult drama The Bay of Silence. Featuring an international lineup of fine actors, the film purports itself to be a Hitchcockian thriller, but Sir Alfred might have taken a much different approach if handed similar material in his heyday. Still, it is passable entertainment for those intrigued by the genre, even if not up to the standards of the Master of Suspense that it apparently wants to emulate.

The film opens at the place where it gets its title, the Bay of Silence, a picaresque resort destination in Italy. There we see lovers Will, played by Claes Bang (The Square, Burnt Orange Heresy), and Rosalind (Olga Kurylenko, Quantum of Silence) cavorting in the surf and elsewhere. All seems fine.

Cut to eight months later in London, where she is very pregnant and the family, including her twin daughters, is expecting the birth of a boy. Into this mix comes her mother, Vivian (Alice Krige), followed shortly by Vivian’s ex and Rosalind’s stepfather Milton, portrayed by the ever-reliable Brian Cox (Emmy nominee for Succession). A horrible accident befalls photographer Rosalind as she takes a shot of her family and falls off a balcony. Remarkably, she survives, as does newborn son, Amadeo But after her recovery, things change.

Coming back from a business trip, Will discovers his wife, the twins, creepy nanny Lena (Maroussia Frank) and the baby boy gone. Written in crude letters on the wall is the word “LIAR.” The safe is ransacked. Where could everyone have gone? This sets frantic Will on a journey to find his family, a trek that eventually takes him to the shores of Normandy in France, where clearly strange things have happened — not just now, but earlier in a key character’s life. An encounter with the twin girls leads Will to his discover that his baby son is dead. Once he confronts a disheveled Rosalind, who doesn’t appear to know who he — or even she — is anymore, he packs everyone up and heads home, distraught at the turn of events that just go deeper and deeper into Rosalind’s past, some long-hidden photos and evidence of sexual abuse. It goes on from there as, bit by bit, Will uncovers the secrets and lies buried at the heart of this film adaptation of Lisa St. Aubin De Teran’s novel with a screenplay from actress Caroline Goodall, who also produces and plays a small role.

Fortunately, all the actors are game for this psychological drama, which has the DNA of stories Hitchcock was attracted to but gets bogged down in the telling, rushing from point to point in an effort to come in at 100 minutes or so. Bang is an attractive leading man, maybe even a candidate to play James Bond, but here he has to traverse a fractured structure to create a credible center for the film. He certainly gives it a good try. Cox increasingly reveals layers of a problematic character as the film goes on, and Kurylenko does her best to express emotional combustion and mental breakdown. The European locations are a nice respite, but I only wish director Paula Van der Oest (Oscar nominated for his Belgium film Zus and Zo) managed more control over the changing tone and beats of the story. It definitely had potential, mostly unmet, but serviceable enough probably to lure fans of the genre and the actors.

Vertical Entertainment puts it out Friday on VOD. Check out my video review with scenes from the film at the link above.

Do you plan to see The Bay of Silence? Let us know what you think.