Continue to Deadline SKIP AD
You will be redirected back to your article in seconds
Skip to main content
January 10, 2019 10:15am 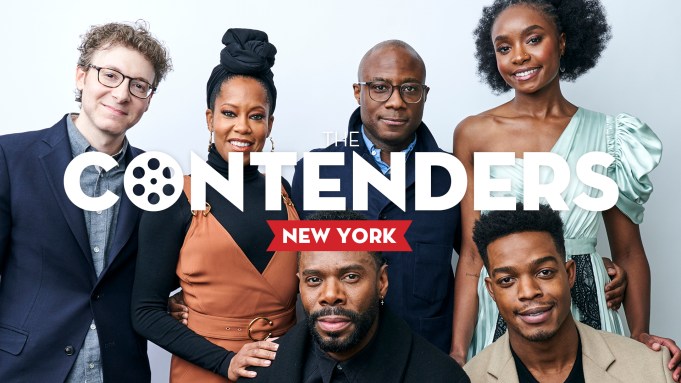 When Barry Jenkins brought his If Beale Street Could Talk team to Deadline’s The Contenders New York, it was something of an emotional reunion, according to Colman Domingo, who plays the story’s patriarch Joseph Rivers.  “Barry, thank you,” he told director Barry Jenkins, “because you really did create a family. Every time we see each other, there’s so much love and generosity with this cast.”

It makes sense that the feeling behind this production would be intensely emotional, given the subject matter. The story, taken from James Baldwin’s novel, follows young lovers Tish Rivers (KiKi Layne) and Fonny Hunt (Stephan James), whose dreams are shattered when Fonny is unjustly incarcerated.

“To me it meant everything,” Jenkins said on the Contenders stage in front of a packed DGA Theater crowd of Academy and guild voters. “I grew up, graduated college and really began to understand Mr Baldwin’s work and kind of worshiped him, and I think in this book, you find the two voices of Baldwin: This voice that’s obsessed with sensuality, romanticism and interpersonal relationships, and [the one that’s] just as obsessed with systemic injustice, in particular the way that American society, the American government plays a role in the disenfranchisement of black people.”

For Layne, hearing she’d got the part was a disorienting experience, to say the least. Jenkins, deciding to surprise her and call her directly instead of going first to her agent, found himself promptly sent to voicemail. “I didn’t recognize the number,” Layne said. Finally, after several tries from Jenkins, she picked up and realized who it was. “He said, ‘Do you even know who you’re talking to?’ and I said, ‘I believe I’m speaking to Barry Jenkins, and I’m just trying to be chill right now.’ ” Layne laughed. “I can’t even describe the feeling but I was just trying to rush him off the phone so I could really go crazy.”

For James, inspiration for the role of Fonny came from reading about a 16-year-old boy given a three-year sentence in 2010 after being wrongfully accused of stealing a backpack. “For me it just really hit home, and it really struck me in a place where I thought, ‘Wow this is only one story. He’s only one in a million,’ he said. “There are so many other young men in this country who are going through the same thing. It really struck me as an opportunity to be a vessel, a voice to speak for so many voiceless young men across the country.”

Check out the conversation with Jenkins, Layne, James, Domingo, Regina King and composer Nicholas Britell in the video above.