Continue to Deadline SKIP AD
You will be redirected back to your article in seconds
Skip to main content
June 16, 2020 5:32pm
2Comments 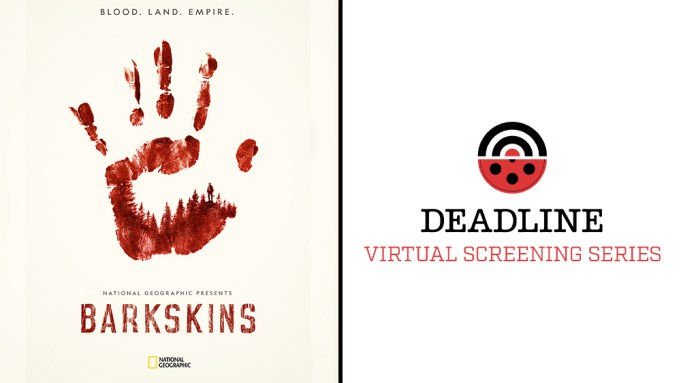 It’s not often that Hollywood takes on stories set during the 17th century of New France aka the early Quebec North Americana territory. Arguably, you’d have to go back to the early 1990s, when such movies as Michael Mann’s The Last of the Mohicans and Bruce Beresford’s Black Robe even came close to the era. This despite the fact that the politics of the day between the French and British settlers, and the Wapanaki and Iroquois nations offer suspenseful tales ripe for any Western. You could even call, National Geographic’s Barkskins an “Eastern.”

Deadline held a virtual screening of Barkskins on Sunday afternoon, speaking with EP and creator Elwood Reid and star Marcia Gay Harden The Oscar-winning Pollock actress, who also stars on Apple TV’s The Morning Show, plays Mathilde Geffard on Barkskins, a French settler making her way as an innkeeper to the British and the French who are stepping on each other’s toes in New France. Meanwhile, Fargo Golden Globe and Emmy nominee David Thewlis plays Monsieur Claude Trepagny, a rich, flamboyant French settler who owns a bulk of the village’s land and is obsessed with building his “Doma” and a sky table in the trees.

Various plots hatch in this limited series adaptation of Annie Proulx’s novel, which is executive produced by Scott Rudin and Eli Bush. Newly arrived young women from France are seeking husbands, one of whom is Trepagny. There’s a pensive rep of the Hudson Bay company, Hamish Goames (Aneurin Barnard), who is looking for an enigmatic man by the name of Cross, a guy who abandoned his sister and her new baby. Relations between the British and the French are growing even more hostile, and darkness looms over the village in the wake of an unexplained massive Iroquois massacre.

Barkskins recently the final two of its episodes Monday night on NatGeo.

You can watch a clip of Sunday’s conversation above.