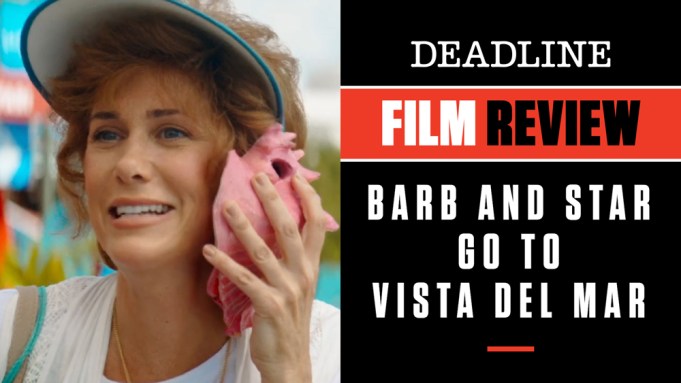 Kristen Wiig and Annie Mumolo actually got nominated for an Academy Award with 2011’s Bridesmaids as Best Original Screenplay. That hilarious comedy also made a mint at the box office for Universal and sparked numerous imitators. Wiig, who also starred in it, steadfastly has resisted turning out a sequel, so I guess what we get with their first feature collaboration since then, this time both on screen together as well as screenwriters, is as good as it is going to get. And no, this is not Bridesmaids, so let’s not go there in trying to compare with that.

What they have dreamed up is just silly, go for the laughs, all-stops-out dumb level fun. In these continuing dark times that actually is kinda a gift, eh? But what do you really expect from this pair, as well as the production entity of Will Ferrell and Adam McKay that is behind it? I actually had to check to see if Barb and Star were ever a bit on SNL, because this film feels like they could have been on that show or at the Groundlings or somewhere. It feels like a sketch come to life for 90 minutes or so.

Wiig is Star, a divorcee, and Mumolo a widow. They “work” together at Jennifer’s Convertibles, a furniture store where they spend more time amusing each other on the display floor than actually do any working. Naturally they get fired, but so what. They have heard about this cool vacation destination in Florida called Vista Del Mar and decide to head there for some well-deserved time off (!) and so off to the sunny beaches, far from their Nebraska homes. Walking into the swank Palm Vista Hotel they are greeted by a Busby Berkeley-style song and dance number from assorted employees that is right out of a 30’s musical. They have hit the motherlode, or so they think until the manager sets them straight informing them their reservation is actually at the seedy Palm Vista Motel. Arrrrrgh. Nevertheless they sneak back to use the pool and the manager somehow decides to help them out and give them a room. This is a bright colorful environment, and these 40-something women can’t get enough of it, chattering (they speed talk like Alvin and the Chipmunks) how great a time they are having, especially at the bar where they meet handsome Edgar (Jamie Dornan) who shares an oversized cocktail with them. This is where it gets really dumb though, since we know from a contrived opening that Wiig is doing double duty for her script by also playing a sci-fi villainess named Sharon Gordon Fisherman who has set in motion an evil plan to unleash swarms of deadly mosquitoes on Vista Del Mar, the town where she was bullied growing up, and she plans to exact revenge with the help of henchman, Edgar, sent there to help facilitate it all.

Dornan doesn’t play him that way at all, and after their drunken bar excursion spends a night in a three-way sexual sandwich with the outgoing pair. Dopey subplot aside, he gets to be the object of both of their affections and affectation, with Star really making a play for him. He also gets to strut his stuff on the beach singing a power love ballad for all its worth as well as other embarrassing comic antics he is put through. Wiig and Mumolo throw tons of one liners against the wall to see what sticks, and surprisingly quite a bit of it does. They are the star attraction of this confection and for that reason alone, Barb & Star is an affable comedy suited to their talents, no matter how silly they let this all become.

Among the supporting cast is Damon Wayans Jr. coming in and out at his leisure, and a piano player appropriately named Richard Cheese who sings verses from “I Love Boobies”, a cheesy scatalogical tribute to the female form by using every slang description of a woman’s breasts. Best of all is a voiceover cameo from none other than Morgan Freeman as a deeply depressed sand crab. Yes folks, it is that kind of movie. Director Josh Greenbaum keeps it all moving at such a pace there is no time to slow down to consider just how dumb it all really is. We wouldn’t have it any other way, would we? Wiig and Mumolo make it shine, along with some dazzlingly delicious production design that would make Vista Del Mar a real destination, if it ever existed in the first place.

Producers are Wiig, Mumolo, Ferrell, McKay, Jessica Elbaum, Margot Hand and Tom Rothman. Lionsgate releases it today. Check out my video review at the link above with scenes from the movie. Do you plan to see Barb & Star Go To Vista Del Mar? Let us know what you think.