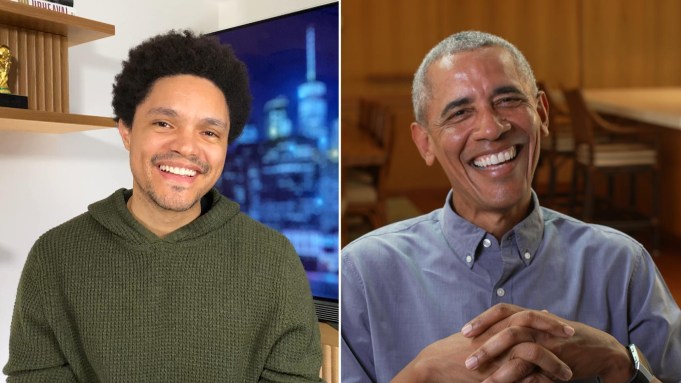 Obama sat down with Noah to conduct an in-depth interview over the weekend and it will air on Tuesday December 15.

It is Obama’s latest appearance on Noah’s show, having appeared just before he left office in 2016.

Noah joked that the former Commander-in-Chief influenced people to run for high office, including Donald Trump and Kanye West. “I don’t know if you noticed, but you have an ability to inspire people to run for the highest office in the land with the jokes that you tell about them,” said the late-night host.

Obama responded, “I should roast people I admire more. I’ll start roasting you. Although you weren’t born here… but I was able to get away with it apparently.”

Obama, promoting his book A Promised Land, also admitted that he didn’t have any withdrawals about leaving office. “There are people I know who had them when they leave public life. Michelle and I, it’s something we share, we feel good about the work we did, we don’t feel anxiety about not being the center of attention. We get frustrated like citizens when we see something unjust or unfair… the goal for us is to find new ways to have that same impact,” he added.

It is President Obama’s latest late-night appearance in recent weeks. Last night, he featured on Desus & Mero and he has appeared on The Tonight Show Starring Jimmy Fallon, The Late Show with Stephen Colbert and Jimmy Kimmel Live!