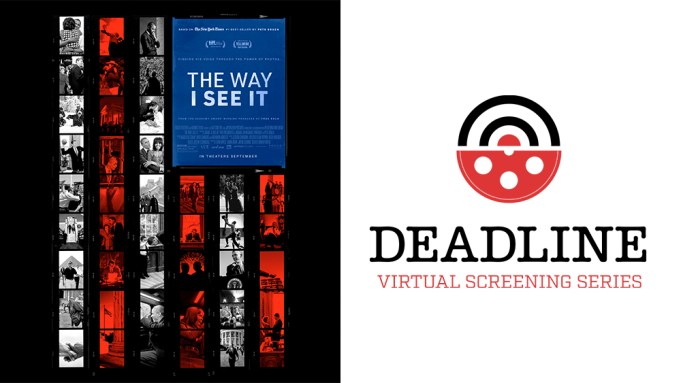 “Mr. Lewis, the goal of his life was to encourage people to speak up and that’s exactly what Pete is doing now,” says The Way I See It director Dawn Porter of the similarities between former Chief Official White House photographer Pete Souza and the late great civil rights leader Rep. John Lewis.

“Having been a fly on the wall and having really dedicated to that kind of craft, he realized he could no longer be silent,” Porter added of the ex-Reagan and Obama snapper’s decision several years ago to come out from behind the camera and to publicly condemn Donald Trump’s ghastly term.

Along with producers Laura Dern and Evan Hayes, Porter (who also helmed last year’s John Lewis: Good Trouble) joined me last night for a Deadline Virtual Screening of The Way I See It – as you can see in the video above.

An up-close and often very sobering perspective on what a POTUS should and could be as opposed to the hate filled, lies filled and chaos of the four long years the former Celebrity Apprentice host was in office, the Focus Features and MSNBC Films documentary premiered at the Toronto International Film Festival last fall.

The Way I See It pulled in nearly 4 million viewers when it debuted on MSNBC back on October 16, 2020 and more than double since.

It’s easy to see why in these deeply divided time.

This portrait of the new public role of the man who worked for Republican President Ronald Reagan and Democratic President Barack Obama reveals the social media savvy Souza has both a voice and an eye.

“He’s someone who went into this without an agenda, he felt strongly that he wanted people to understand the difference between what he thought was right and wrong,” producer Hayes noted of Souza, his post-White House life and sharply using his work to document Trump’s overwhelming failings.

Fellow producer Dern noted that the documentary’s use of images from the coronavirus pandemic and the protests against police brutality and racial injustice following the murder of George Floyd and many others was to honor “photography as well as a part of this story’s journey, that these are our archivists.” The long time politically active Oscar winner added: “Not only singular to Pete, the gift of photography is the gift of our history, so that we will never forget.”

As much as The Way I See it looks through Souza’s lens, literally and figuratively, the film also focuses on the historic Presidency of Barack Obama and the deep relationship and trust between the photographer and his primary subject. To that end, Porter told us what it was like to see the documentary with the former President and former First Lady Michelle Obama last summer.

“We received word from their personal assistant that the Obamas would be delighted to join us for a socially distanced screening of the film,” the director said. “We all sat behind the First Couple, we saw them wipe away a tear,” she added. “I think they saw what we saw which is that they did make an impact and they really did serve this country will great grace and empathy and that the country was better for it.”

Which is what Pete Souza saw too.