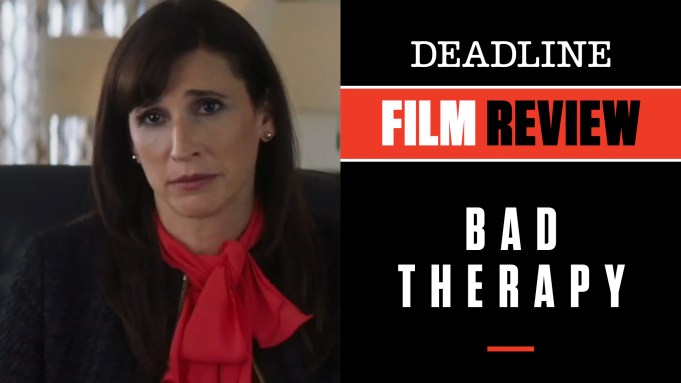 Sometimes very good actors simply cannot save a comedy from careening out of control. That is pretty much the case with Bad Therapy, in which Alicia Silverstone and Rob Corddry pick the wrong therapist to try to right their shaky marriage. This movie ought to set the cause of the profession back beyond Freud. The ad line on the poster says “Trouble by the hour,” but this thing clearly is in trouble less than 20 minutes after it starts.

The movie, which hits digital platforms and VOD on Friday, is not a half-bad idea, if not completely original. I am game for a flick that can sharply make fun of the Southern California mores and the reliance on therapists to get us through the day, and this one starts off smartly in that direction. Susan (Silverstone) finds a therapist named Dr. Judy Small (Michaela Watkins) to run interference in her marriage to Bob (Corddry), who wants a baby even as she is satisfied with the one child she has. That is 13-year-old Louise (PEN15’s mean girl Anna Pniowsky), from her previous union with a first husband who tragically died in a fishing accident.

Right now Susan wants her new Prince Charming to take care of both of them and pay the bills while she pursues a career that satisfies her. Dr. Judy’s advice doesn’t exactly jibe with that plan as she tends to take the side of Bob. Things don’t get better when the doc suggests family therapy involving Louise — resulting in an out-of-left-field accusation from Susan that Bob is looking at his stepdaughter in ways that are anything but fatherly.

It goes downhill from there — and so, sadly, does the picture as Dr. Judy engages both partners in solo sessions and soon reveals she has ulterior motives regarding Bob, as well as a background that would horrify most in the field she claims to be a part of. As the completely clueless (to use the title of a much better comedy starring Silverstone) Bob falls under the therapist’s spell in ways hard to explain, Susan pursues her real estate career, Louise spends a lot of time with her best friend, and Dr. Judy becomes increasingly psychotic to the point this film could be called The Hand That Rocked the Whole Family.

In an unnecessary subplot that further threatens to torpedo the tricky dark comedic balance director William Teitler and screenwriter Nancy Doyne (unwisely adapting her own novel) are trying to create, Bob also falls briefly under the spell of a flirtatious woman he gets drunk with after work. This particularly seems out of character for Bob, a simple guy who works for a nature TV channel, and it gets the story nowhere before it is completely dropped. Meanwhile, Susan gets more unhinged herself as she suspects Bob of getting it on with Dr. Judy. Unfortunately, the level of hysteria she exhibits doesn’t match the paltry level of laughs available here.

I really wanted to like Bad Therapy, but it ain’t no Analyze This OR That. Silverstone strains to find the right tone for this outing, while Corddry gamely tries to make sense of some of the embarrassing stuff he has to do. And considering the leaps in credibility for Dr. Judy, the wondrous Watkins manages to create some semblance of a human being, no easy feat. Among the supporting cast Aisha Tyler has the stereotypical best friend role, Haley Joel Osment (Oscar nominee for The Sixth Sense — remember?) is basically wallpaper as a co-worker of Bob’s, and David Paymer maintains his dignity as a former supervisor of Dr. Judy who knows the real truth. By the way, Corddry and Watkins are also teamed in the terrific new TV sitcom The Unicorn, in which they are married friends of the lead, a widower played by Walton Goggins. I highly recommend checking that show out, if you haven’t already, to see these two immensely talented performers given material worthy of those talents.

Producers are Teitler and Gina Resnick. Gravitas Ventures is the distributor. Check out my video review with scenes from the film at the link above.

Do you plan to see Bad Therapy? Let us know what you think.