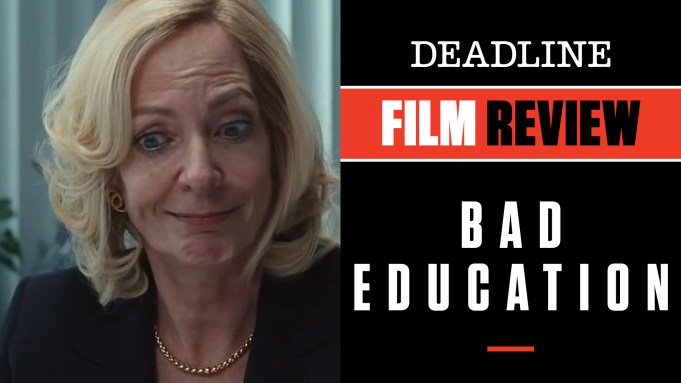 When Bad Education hit the Toronto International Film Festival in September, it was expected to be one of the hot titles for acquisition and a possible Oscar run in the fall. It certainly was a hot commodity, but the sale surprisingly went to HBO for a sizzling $20 million, and a movie starring Hugh Jackman coming off The Greatest Showman and Allison Janney with an Oscar win for I, Tonya suddenly went from theatrical to television. As it turns out that timing is everything: Theaters are closed, and its debut on the pay cabler Saturday evening should be huge, certain to thrust Jackman and Janney into a very strong position in the Emmy race. This turn of events for Bad Education is as unpredictable as the wild real-life story it tells.

Set more than a decade ago in a tony area of Long Island, Jackman — in a role like you have never seen him play before — is Frank Tassone, superintendent of the Roslyn School District, a snappy dresser beloved by students and their parents who seem to care only how their kids get into Harvard or Yale and know a guy like Tassone can be a big help by making these local LI schools top quality. Janney is Pam Gluckin, his second-in-command who’s always poring over the budgets and receipts. In his office for what she says is a “puff piece” interview for her school paper, budding journalist Rachel (a terrific Geraldine Viswanathan) gets some inspiring advice from Tassone to never settle for easy as he urges her to really dig in and make her story more surprising and hard edged. Be careful what you wish for.

As she goes deeper into reporting what basically was a unrelated subject, Rachel uncovers a whole can of worms that, despite her editor (Alex Wolff) initially offering no encouragement, instead leads right to Gluckin’s office and a case of cooking the books, an apparent use of school funds for her own personal benefit. But it doesn’t stop there as this scandal widens and leads right to Tassone’s door as well, an embezzlement scheme of more than $11 million that threatens to bring down the whole house of cards while becoming the biggest of all time in a public school. Throw in another shocking twist with the revelation that widower Tassone is involved romantically with a former student named Kyle (Rafael Casal), and things just aren’t always what they appear to be on the outside.

Director Cory Finley (Thoroughbreds) takes these incredulous details and weaves a delicate balance of dark comedy and a building thriller as things come apart. The script from Mike Makowsky, a student in the district at the time who witnessed it all happening firsthand, manages to build it expertly as the facts just keep defying reality except that it is, as they say, stranger than fiction. With a never-better Jackman, who rises to new levels here, and Janney delivering another sterling turn, the supporting cast also includes an excellent Ray Romano as the school board president. And all three nail the Long Island accents perfectly.

What makes Bad Education really work is that it never once slips into the tired tropes of these kind of stories, injecting a wry humor, and importantly making it recognizable with all the failings and unpredictability of human nature on full display. When I first saw the film, even before it formally hit Toronto, I knew nothing about it, and when the end credits revealed the actual true origins of the story, it had even more impact. How can you make this stuff up? They didn’t have to.

Producers are Fred Berger (La La Land), Brian Kavanaugh-Jones, Julia Lebedev, Oren Moverman, Eddie Vaisman and Makowsky. Check out my video review with scenes from the film at the link above.

Do you plan to see Bad Education? Let us know what you think.