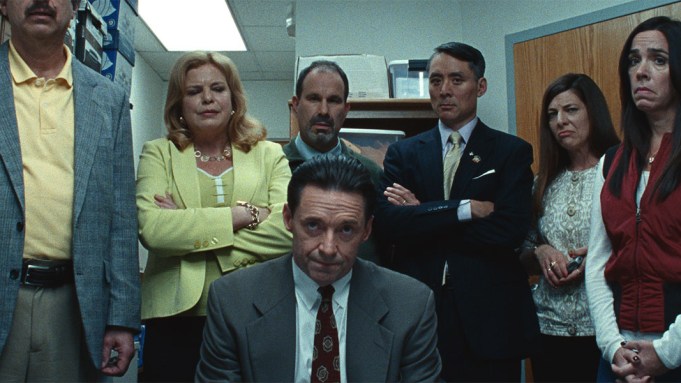 “I got to work with the Wolverine,” Ray Romano told Deadline at TIFF of his latest film Bad Education. “It was fun. He tap-dances, by the way. He was in the trailer next to me, and I would hear.” Romano is, of course, talking about Hugh Jackman.

Based on true events, Bad Education follows the story of Long Island school superintendent Frank Tassone (Jackman) and his assistant superintendent for business, Pam Gluckin (Allison Janney) as they embezzle the school system—only to be caught out by a smart student reporter Geraldine Viswanathan. Romano plays faculty member Bob Spicer.

Janney found her character complex and interesting she said, particularly in regard to the motivation behind her embezzling. “I think that there’s a certain justification in her wanting to have what she didn’t have,” Janney said, “or give to her kids what she couldn’t give to her kids. Working in a school district like Roslyn School District, the kids were pretty affluent, and had things that she wanted her kids to have, and [she] felt that she had a right to give them those things… justifying bad decisions—that was what was fascinating to me.”

Screenwriter Mike Makowsky was a student in the area at the time of the scandal and Alex Wolff’s student paper editor character is loosely based on the writer.

“He is the head of the school newspaper,” Wolff said, “and he’s kind of this sardonic Mr. Sarcasm… He’s got a nice paradox in him. He’s making sure the paper does exactly the right thing, but at the same time, acts kind of cavalier about it. I liked hanging out with Mike, the writer, and getting an inspiration of how to be like a snot-nosed, little brat. It was really fun, and I love Mike. But he taught me how to do it very well.”

Director Cory Finley had originally felt the pull of the story not only because of a family connection to teaching, but because the story is so nuanced and thought-provoking.

“I read this script shortly after I did my first movie, Thoroughbreds,” he said, “and I connected to it on a bunch of levels. I come from a family of educators, and I’ve worked as an SAT tutor myself. This kind of an insane, true story about the largest embezzlement scandal in American public school history, and I just thought it was a wonderfully morally complex story, a really thrilling and funny story, and something that I wanted to spend the next several years of my life working on.”

The story felt timely to Finley, and he hopes audiences take away a new attitude toward trust and the balance of power. “In one sense, I think it’s a cautionary tale about putting blind trust in institutions, and in leaders,” he said. “Particularly when things are going really well, it’s very easy not to question the forces arrayed around us.”