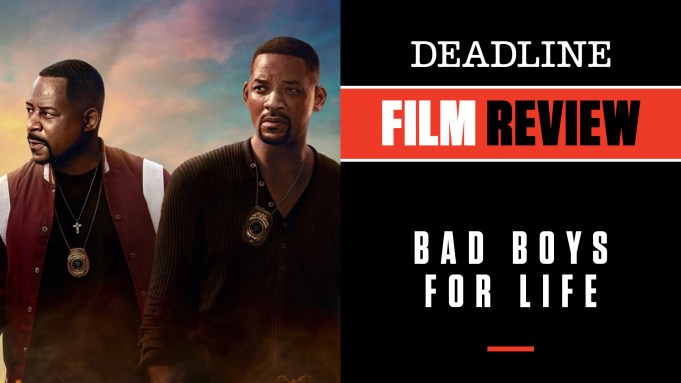 It has been 17 years since Bad Boys II and a quarter-century since the original Bad Boys in 1995. Michael Bay directed both of them, making his film debut on the original. But he’s not back for this long-awaited and long-in-development third edition of the franchise starring Will Smith and Martin Lawrence as Miami cops, and that isn’t a bad thing at all considering Bay’s penchant for non-stop mayhem. He never met a car chase or explosion that didn’t go on way too long and too frequently.

The good news is little-known Belgian directors Adil El Arbi and Bilall Fallah not only have re-energized this franchise and made it seem like new again, but they know the best way in is to bet on the chemistry between its stars and the emphasis on characters we come to care about. It might have been a long dry spell between Bad Boys movies, but this is the best Bad of them all.

And make no mistake, Arbi and Fallah and their writers Chris Bremner and Peter Craig and Joe Carnahan (who originally was set to direct too) don’t stint one bit on the action, much of it violent in this R-Rated film. This movie is full of satisfying set pieces and stunts you would expect from a raucous franchise, but in focusing on aging, total-opposite cop partners — Lawrence’s Marcus is becoming a grandfather and wants to retire, and Smith’s Mike Lowry is still in the game and wants to continue — there’s the opportunity for these perfectly matched actors to really create three-dimensional human beings amid all the fireworks on screen. And that they do. This is Smith and Lawrence at their movie-star best, and actually they don’t look like they have aged much at all in the 25 years since first inhabiting these roles.

In terms of the Bad Boys vs. the Bad Guys, the plot is typical of a lot of these movies that don’t give a whole lot of dimension to their villains. Here it is: Some Mexican baddies are new to town with a goal of knocking off one Miami official after another who get in the way of their evil goals. The leader of the pack is Isabel (Kate Del Castillo), a woman who happens to be was an old girlfriend of Mike’s, but one he now refers to as a witch. She’s a scary one and has some voodoo stuff in her DNA, and her key associate is her son Armando (Jacob Scipio), along with some others in the gang now out for their own revenge.

But it gets complicated. Mike is a victim in the early part of the movie, shot down in cold blood in the middle of a crowded street. It is hit and miss whether he will recover (of course he will), but it makes him more determined than ever to come back. However, he is thwarted by his partner, who demands that he quit. But that won’t happen, and eventually Marcus is drawn back in for one last time himself. The Bad Boys are back in action, and along for the ride is a younger group of associates helping out and spelling out the divide between generations. In addition to all this, there are some choice scenes with the Captain, played nicely by Joe Pantoliano.

The cast, which also includes Vanessa Hudgens, Paola Nunez, Alexander Ludwig and Charles Melton, among others, is fine, but this all belongs to Smith and Lawrence, who have slipped back into this milieu without missing a beat. Sony Pictures has tried unsuccessfully of late to reboot a lot of its past successful franchises including Men in Black, Charlie’s Angels and The Grudge — all of which disappointed at the box office with their retreads, But this one should join Jumanji as one blast from the past that really works for the Culver City studio.

Jerry Bruckheimer, Doug Belgrad and Smith are producers, and interestingly Bruckheimer revived the logo of Don Simpson/Jerry Bruckheimer Films for this one in tribute to his late producing partner Don Simpson, who died eight months after the original Bad Boys debuted. Bay, by the way, shows up in a brief acting cameo early on. It opens Friday. Check out my video review with scenes from the film by clicking the link above.

Do you plan to see Bad Boys for Life? Let us know what you think.