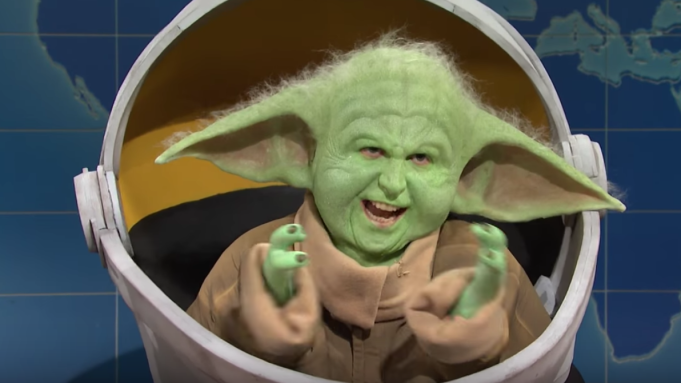 Fresh off the news that Mattel, Hasbro and others have toys and merchandise for sale next spring or the breakout star of the recently launched House of Mouse streaming service’s Star Wars spinoff The Mandalorian, the little guy with big Force cruised by the Weekend Update desk tonight to tell it how it is – sounding a lot like a very small male version of Cardi B, as you can see in the video above.

“I’ve got my clothing line coming out,” the Kyle Mooney performed homage and simultaneous pop culture street level mocking of Baby Yoda noted of upcoming “projects, as Che put it. “Plus, I’ve got the rap mixtape …the stand-up special with Netflix,” Baby Yoda, or “the child” as the character is officially called on the Jon Favreau created Mandalorian, proclaimed.

When asked by a very pretend shocked Che if he really did comedy, the swaggering Baby Yoda (well, as much as anything can swagger in a space egg) replied, “I basically tell stories of who hooked up on The Mandalorian set.” The heavily made-up Mooney added: “Me.”

Baby Yoda was of course, also front and center in the sixth episode of The Mandalorian which just dropped on December 13, this weekend too. Which, with Star Wars: The Rise of Skywalker hitting the big screen big time on December 20 and Marvel’s Black Widow herself Scarlett Johansson hosting SNL tonight, a bit of Baby Yoda made the NBC show seem more executive produced by Bob Iger than Lorne Michaels – and that’s a skit I’d pay serious money to watch.

Speaking of watching, after you take a look at Baby Yoda on Weekend Update, check out the video below to see all that went into giving cast member Mooney the little green guy’s look for tonight.