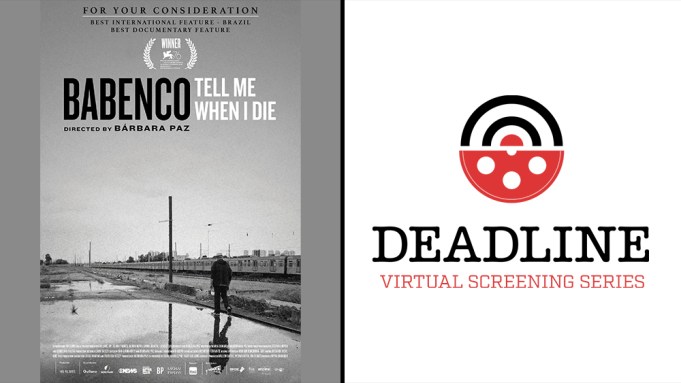 “I didn’t want the film to be a filmography,” says Bárbara Paz, the director and wife of late award-winning Argentine-Brazilian filmmaker Hector Babenco in her love letter documentary Babenco: Tell Me When I Die, “I wanted to make a film about cinema, wanted to make cinema for him, not only about him.”

The doc, which Paz shot toward the end of Babenco’s life as he battled with lymphatic cancer, a diagnosis which he had since he was 38 before dying at the age of 70 in 2016, is not only a look back at the filmmaker’s illustrious work which captured the emotional lives and struggles of those living on the fringe of society, but also an ethereal cinematic poem, an homage to who he was.

Paz made the movie with Babenco’s daughter, Myra Arnaud Babenco of HB Filmes who served as producer, along with Globo Filmes and Sao Paolo-based Gullane. Both of them joined us for our recent screening and panel along with esteemed Brazilian filmmaker Walter Salles who drew great inspiration from Babenco.

Babenco, like Italian director Vittorio De Sica before him, sought to show a realism in cinema, and would often use nonactors. For example, Babenco’s 1981 movie Pixote was shot in the Brazilian prison system and starred real children in a docu style. The pic followed the life of a boy in the streets of Sao Paulo, who is involved with crimes, prostitution and drugs. A few years after the movie was released, the lead, Fernando Ramos da Silva, was killed by police in connection with a robbery. He was 19 years old. Pixote was nominated for Best Foreign Film at the 1982 Golden Globes. Another one of Babenco’s great neo-realism movies, which Myra Arnaud Babenco is currently restoring, is his 1977 work Lucio Flavio about a famous Brazilian bandit of that time.

However, it was Babenco’s 1985 movie Kiss of the Spider Woman which catapulted him into the Hollywood spotlight and put Brazil on the map in regards to filmmaking ultimately yielding such greats as Salles and Fernando Meirelles. Kiss of the Spider Woman, which was nominated for four Oscars, including Best Picture, and won Best Actor for William Hurt, was a true groundbreaker for the industry. It was a major movie that put a spotlight on a LGBTQ protagonist. It stunned the Hollywood establishment who deemed such fare as unbankable making an impressive $17M at the domestic B.O. at the time off its $1.8M budget. Keeping in the spirit of Babenco’s work, Kiss of the Spider Woman, centered on two characters who would then be deemed social outcasts: a gay man (Hurt) and a political prisoner (Raul Julia). The pic, which takes place during Argentina’s so-called dirty war of the 1970s, followed the duo’s relationship as cellmates, who at the onset, are ideologically incompatible. Kiss of the Spider Woman, based on the novel by Manuel Puig, would ultimately be turned into an early 1990s hit musical with a book by Terrence McNally and music by John Kander and Fred Ebb. The musical racked up seven Tonys including Best Musical in 1993.

Babenco would go on to do two more Hollywood movies: 1987’s Ironweed with Jack Nicholson and Meryl Streep and 1991’s At Play in the Fields of the Lord starring Kathy Bates, John Lithgow, Daryl Hannah, Aidan Quinn, Tom Berenger, and Tom Waits. Overall, his work spanned 12 features, his finale being his 2015′ semi-autobiographical My Hindu Friend starring Willem Dafoe as a dying filmmaker.

“I think Hector had an extraordinary impact in cinema in Brazil, but also in Brazilian culture as a whole,” Salles told Deadline, “The role of cinema is to show you that the world is more ampler than it could be, and Hector did this for us in many ways, in each of his films.”

Babenco: Tell Me When I Die won the Venice Classics Award for Best Documentary in 2019. The documentary is Brazil’s Oscar submission for the International Feature and Documentary Feature categories as well as the Independent Spirits documentary category.