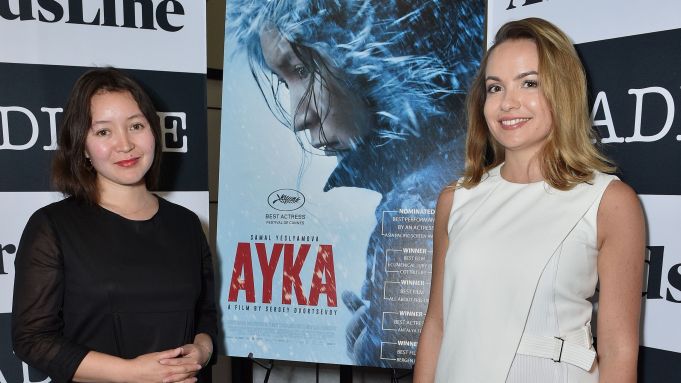 Forging a film career, in partnership with writer/director Sergey Dvortsevoy—a career that took her to Cannes in 2008—actress Samal Yeslyamova recently reteamed with the director on his latest, winning the prestigious French festival’s prize for Best Actress. Titled Ayka, which translates in English to “My Little One,” the social drama examined the emotional and physical potency of motherhood, and emerged from one specific statistic. In maternity hospitals in Moscow in 2010, 248 babies were given up by mothers from Kyrgyzstan—mothers who could barely take care of themselves, striving only to survive in a brutal climate that presented precious few opportunities. Mothers like Ayka.

This year’s Kazakhstani entry for Best Foreign Language Film, Ayka was shot in chronological order over the course of seven years with a cast that included many non-professional actors—many of them, immigrants themselves. For Yeslyamova, despite all the challenges the project presented, signing on was a no-brainer. “My director told me that he wanted to make a movie about this intense connection between a mother and a child. Obviously it was very interesting to me because I believe it was the most interesting part of a human being, being a parent and being a child, and this connection between them,” she said, speaking through a translator. “I’d been studying in Moscow; my parents, they live in Kazakhstan, and every time I left from my own town to Moscow, I felt a very heavy burden. This separation was tough for me to go through.”

Joining the actress last night on a panel following an Awardsline screening of the film was Elena Larionova, of the National Film Academy of Kazakhstan, who spoke to her deep appreciation of Dvortsevoy’s works—having produced his last narrative feature, Tulpan. “Sergey is a special person, a special director. He’s not like all the rest. Like all talented people, he’s not simple; he’s sophisticated,” Larionova explained. “He has his own vision, he is a perfectionist, and he came from documentary films, so if he needs real snow in the film, he will wait for this snow.”

At one point, Larionova also translated for the Ayka star, trying to get at the heart of what she was saying about the conditions in which the film was made, and what drove each of the film’s artists—above and below the line—to participate. “The crew that was working on this film, they were like a family, and it was not about a work project, money or something. They were just driven by an idea, the idea to make this film and help the director to deliver what he wanted to deliver,” she relayed. “I know those people, and they actually sacrificed their private lives because the [shoot] was seven years [long]. They lived together with those immigrants, they saw their problems, so it was maybe not a typical production. It was a challenge; it was a story.”

For more from our conversation with the night’s panelists, click above.