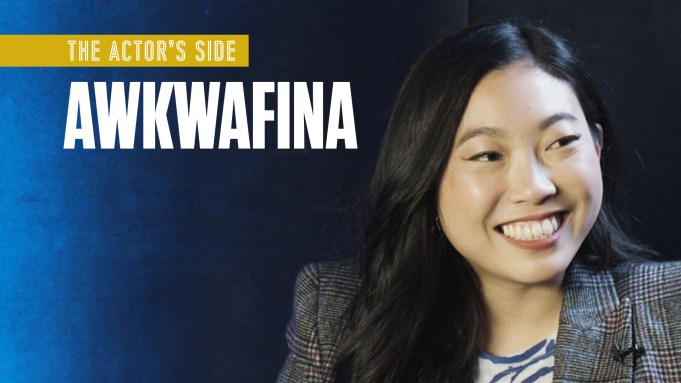 You may not know her by her real name Nora Lum, but by now the world knows who Awkwafina is, and there’s serious Oscar buzz for her first dramatic performance in the hit specialty film The Farewell. When she visited our Deadline studios to tape this week’s edition of my video series The Actor’s Side, all she could say about that “buzz” is it was “cool,” but I have to add certainly well deserved.

She wasn’t fluent in Mandarin when she went to China to film writer-director Lulu Wang’s somewhat autobiographical movie, but she learned fast in order to be believable in the role of Billi, a granddaughter who travels from New York to China to reluctantly help carry off a family wedding that is essentially a ruse to cover up the fact that they are all gathering for one last goodbye to their Nai Nai. The matriarch of the family has been given a terminal cancer diagnosis but is being kept in the dark about it by her loved ones.

In our conversation, we talk about the challenges of the role, working with an Asian American female director, how she couldn’t stop crying even during rehearsals and how her own grandmother gave her smart advice. We also discuss why rapping and comedy will always be just who Awkwafina is, her life-changing year in which both Ocean’s 8 and Crazy Rich Asians made her a household name, and her upcoming Comedy Central series Awkwafina Is Nora From Queens which she just finished shooting.

To watch the conversation, click on the video above.