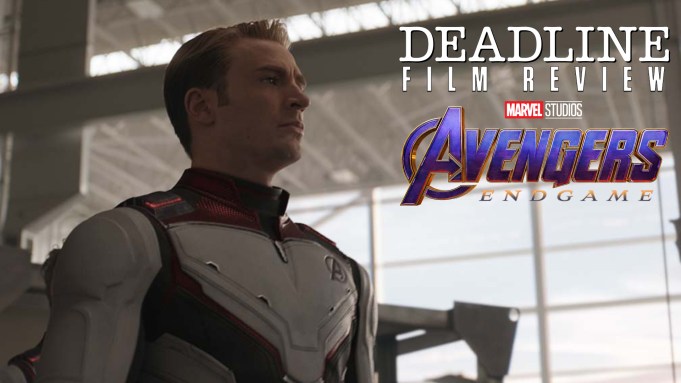 There can be no question that the much-awaited “finale” to the Avengers saga, Avengers: Endgame, is indeed a fitting end game for this enormously popular franchise. In the press invitation, Disney warned critics not to offer up any spoilers and plot points that ruin the twists and turns in the Joe and Anthony Russo-directed superhero mashup, and I certainly won’t do that. There is so much going on in the 3 hour, 1 minute running time that we would be here all day if I even tried.

Suffice it to say, despite the startling events that seemingly killed off half the Avengers at the end of Avengers: Infinity War by having them evaporate into dust, things aren’t always as they appear. There still is that villain, Thanos (Josh Brolin), who has destroyed half of humanity after collecting the six infinity stones that provide the power to whoever possesses them. And even in our first meeting with Thanos this time around, things aren’t exactly what we expect.

The way the Russos and screenwriters Christopher Markus and Stephen McFeely play with an ever-winding plot that weaves just about every single Marvel hero and heroine back into this story is, on its surface, fairly predictable, but it evolves into a true fan delight. If ever there was a movie that delivers satisfying endings to its loyal fan base, it is this one.

What really makes it all work is the combination of laughs, action and more emotion than I have ever seen in a comic book movie. Endgame gets it thrillingly right because of a determined focus on character and the human traits of this ragtag mob. At its center is the core Avengers group (they just got handprints and footprints at Grauman’s Chinese as a parting gift) of Tony Stark aka Iron Man (Robert Downey Jr. ), Thor (Chris Hemsworth), Captain America (Chris Evans), Black Widow (Scarlett Johansson), Hulk (Mark Ruffalo) and Hawkeye (Jeremy Renner). Their interplay is effortless, and thank God that even at its most solemn (it does have a darker tone), the emphasis on the comic in comic book movie is not lost on this crowd.

Of course this is really an all-star affair, so fear not: There are plenty of appearances (large and small) from the MCU including newbie Captain Marvel (Brie Larson), Rocket (voiced by Bradley Cooper), War Machine (Don Cheadle) and many more. Especially welcome in this one is Ant-Man played by Paul Rudd, who gets some of the best material here. Avengers: Endgame is the equivalent of a greatest hits compilation album, with all these characters interacting in one way or another, and offering fans some much-needed closure to storylines that started in their own films. In fact some theatres are offering a 22-film marathon for zealots to catch up with a refresher course, so if you have three days or so to spare you might want to consider it before seeing this final entry into the MCU.

And if Endgame is your first Marvel experience, not to worry. Although the time zones can be confusing, this is relatively easy to join up and still get pleasure from this all-star cast giving it their all. Tops in that department is Downey, who leaves much of the Stark snark at home and genuinely finds the inner soul and beating heart (literally) of this Iron Man. Comic honors go to Rudd and especially Hemsworth, who literally transforms himself in hilarious ways to which older guys in the audience will definitely relate. And another major shout-out to Evans, whose Steve Rogers/Captain America is full of heart and poignancy, in addition to one particularly kick-ass battle scene.

Kudos to Kevin Feige who has produced all 22 of these films into a box office phenomenon that is a producing achievement (all of them opened at No. 1 in the world) that is largely unprecedented outside of Bond. James Bond. Production values are superior, as you have grown to expect. What’s also fun are the end credits. Every fan knows what to expect, so they stay patiently in their seats all the way to very last logo looking for those Easter eggs. Do that for sure this time.

For me this was the most satisfying credit crawl from Marvel ever, but I can’t reveal why — except to say the way they chose to close it out is entirely appropriate even though fans at my screening audibly expressed shock. And also be sure to check out my video review above with scenes from the film.

Do you plan to see Avengers: Endgame? Of course you do. Let us know what you think.