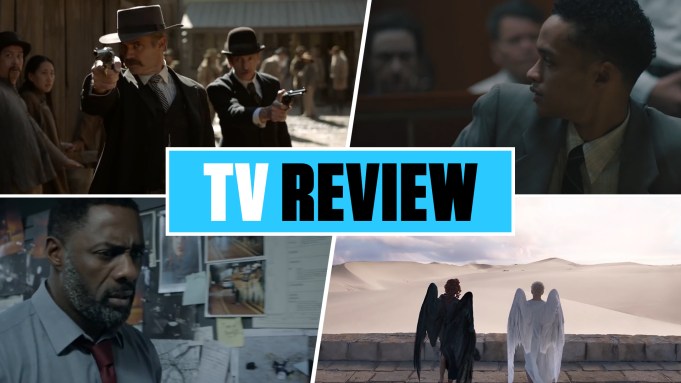 The NBA Finals kick off tonight with reigning champs the Golden State Warriors up against the Toronto Raptors. But they aren’t the only big game on the small screen this week.

Tomorrow sees Neil Gaiman’s Good Omens limited series launch on Amazon and Ava DuVernay’s When They See Us four-parter debut on Netflix. On premium cable, HBO and David Milch continue the saga of a certain lawless frontier town with Deadwood: The Movie on Friday night, while June 2 brings Idris Elba’s Luther back to BBC America for a fifth season.

From such deities, there is a lot to have faith in, but, as you can see in my video review above, only one will be the show you have to watch this week.

Thirteen years after Deadwood the Emmy-winning series was canceled by HBO, Deadwood: The Movie reunites Ian McShane, Timothy Olyphant and most of the gang from the Milch-created and profanity laced saga of the booze- and sex-drenched Dakota town. Directed by Daniel Minahan, the 110-minute feature film also finds that McShane’s salon and brothel owner Al Swearengen and Olyphant’s lawman Seth Bullock have gone through a process of evolution in the passing years, to put it mildly David Milch-style.

Directed and co-written by A Wrinkle In Time helmer DuVernay, Netflix’s limited series When They See Us is based on the false prosecutions and interment of five Harlem young men of color for a brutal rape that shocked New York City and the nation 30 years ago. With cinematography by Bradford Young, the tale of the so-called Central Park Five and the forces determined to find them guilty — among whom Donald Trump is distinctly cited — stars Michael K. Williams, Vera Farmiga, John Leguizamo, Felicity Huffman and Niecy Nash, with Asante Blackk as Kevin Richardson, Caleel Harris as Antron McCray, Ethan Herisse as Yusef Salaam, Jharrel Jerome as Korey Wise and Marquis Rodriguez as Raymond Santana.

Adapted from the 1990 novel he wrote with the late great Terry Pratchett, the Gaiman-showrun and -scripted Good Omens certainly proves that the End of Days on Amazon Prime always goes better with a Queen soundtrack. Directed by Douglas Mackinnon and drawing on material from a never-published sequel, the sprawling six-parter is led by Michael Sheen and David Tennant, and has a cast that includes Jon Hamm, Miranda Richardson, Jack Whitehall and Michael McKean. The Good Fight regular Sheen and the former Doctor Who Tennant play a humankind loving angel and demon, respectively, trying to save the world, curtail the teenage anti-Christ, enjoy a good drink and not get in trouble with their bosses (voiced by Frances McDormand and Benedict Cumberbatch).

Idris Elba has the Fast & Furious spinoff Hobbs & Shaw coming to the big screen later this summer, but before that, the multi-Emmy nominee is back this weekend as DCI John Luther. Having taken a nearly four-year break since the last installment of the Neil Cross-created crime drama, Season 5 of Luther will play over four nights on BBC America and finds the tormented London detective reunited with Ruth Wilson’s Alice and a grizzly case in what may be the series’ final episodes.

So which one is the three-pointer show you just have to watch? Lace up and watch the video above to find out.