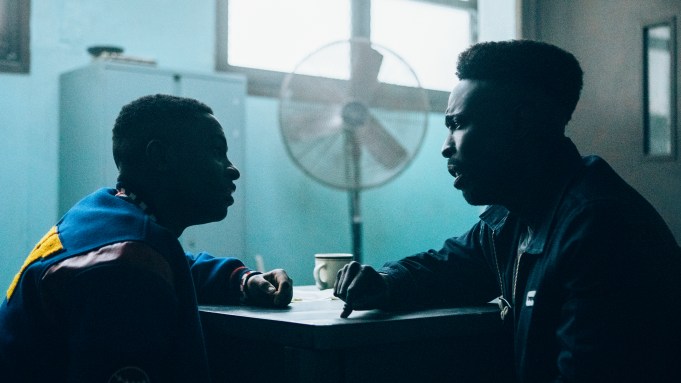 “Whatever they said I did, I didn’t” Raymond Santana Jr. (Freddy Miyares) tells his parents of the allegations of gang rape that the police and prosecutors are stitching him and four others up for, in the first trailer for the Ava DuVernay and Netflix’s Central Park Five-based When They See Us limited series that debuted today.

With the tagline “The Story You Know Is The Lie They Told You,” the almost three-minute long trailer starts in a NYPD interrogation room and becomes more harrowing as five young men of color are railroaded through the system for the brutal and infamous rape of a white woman in NYC’s Central Park in 1989.

Today is the 30th anniversary of that horrible attack.

Despite inflammatory demands by the likes of then real-estate developer Donald Trump and more for their heads on a legal pike, Antron McCray, Yusef Salaam, Raymond Santana, Jr., Kevin Richardson and Korey Wise, who became known as the Central Park Five, were innocent – as would be proven years later.

Launching on May 31, the Oscar nominee’s latest collaboration with the streamer is based on the harrowing case of the Central Park Five & the long fight by five young men & their families for true justice.

Enveloped in a legal controversy of her own, Felicity Huffman is in WTSU and today’s trailer as Linda Fairstein, the prosecutor who headed the Manhattan district attorney’s sex crimes office during the case that finally ended in 2014.

Huffman plead guilty on April 8 in the college bribery scheme that saw over 30 deep pocketed parents, including not guilty pleading Lori Loughlin, snared by the feds in a nationwide ‘Operation Varsity Blue’ probe. The nationwide scandal saw parents working with crooked coaches and others to get their kids into top tier schools by fake SAT scores or phony athletic credentials.

Facing an maximum of 20 years behind bars on conspiracy charges, the now apologizing American Crime star will be back in court in May after making her own deal with authorities for a reduced sentence.

As well as unveiling the WTSU trailer this Good Friday, DuVernay and Netflix announced that they will instigate a wide ranging campaign in coordinating with the series to back the efforts of the criminal justice reform movement.

Along with the 13th director, When They See Us was co-written by Attica Locke, Robin Swicord, and Michael Starrbury.

Jeff Skoll and Jonathan King from Participant Media, Oprah Winfrey/Harpo Films, Jane Rosenthal and Berry Welsh from Tribeca Productions and DuVernay serve as executive producers on When They See Us.