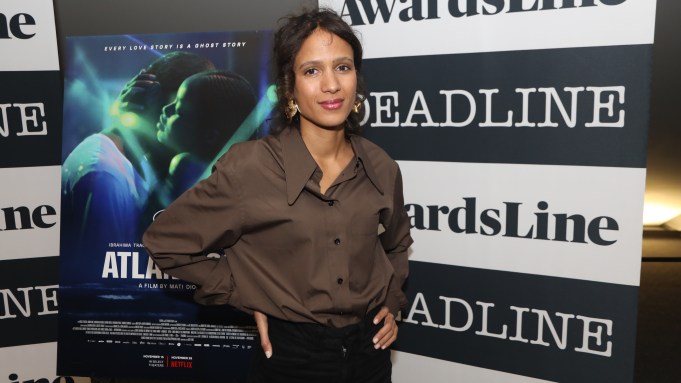 Director Mati Diop’s Cannes prize-winning film, Atlantics, is an intense young love story rooted in elements of the supernatural. It’s set along the Atlantic coast where a soon-to-be-inaugurated futuristic tower looms over a suburb of Dakar. There in the capital of Senegal is seventeen-year-old Ada, who in love with Souleiman, a young construction worker, but she has been promised to another man. One night, Souleiman and his co-workers leave the country by sea, in hope of a better future. Several days later, a fire ruins Ada’s wedding and a mysterious fever starts to spread. Little does Ada know that Souleiman has returned.

The piece originated from Diop’s 2009 short of the same name, which focused on a young man who embarks on the treacherous journey to migrate via ships from Senegal to Europe.  For this feature-length, Diop wanted to explore a different angle.

“I kept on thinking about the desire, but mostly the need, the write a feature about the situation of migration but from another point of view,” said Diop following a screening her film as part of Deadline’s Awardsline screening series.

She continued, “The first major choice was to talk about the disappeared youth in the ocean from the point of view of the living, of the one who stay, in order to talk about the experience of losing these people, of how does it transform the everyday life and imagination of the people who stay.”

On the decision to tell the story through a woman’s point of view, the director shared that “it wasn’t necessarily going to be a young woman, a young girl in relationship to a brother or a lover. I really wanted to write a love story because I thought, I felt was missing in cinema today. To propose a strong love story between two young people from Dakar, young black character. It was maybe 5 or 6 years ago and I said ‘yes it is definitely something I want to see on the big screen.'”

Speaking to her personal connection to the film, the French-Senegalese filmmaker felt a “huge responsibility” to tell an authentic story.

“The post-colonial issues and complexity is something that’s part of me,” said Diop. “That what makes making a film in this context even more challenging, ambitious, and exciting because it becomes territorial.”

Earlier this year, Diop made Cannes history as the first black, female director to have a film in Competition. The film picked up the Grand Prix prize at the fest. Diop was also feted with the Toronto Film Festival’s inaugural Mary Pickford Award, which spotlights emerging female talent. On top of all that, Atlantics was submitted by Senegal to compete for the 2020 International Feature Film Oscar.

For Diop, the awards recognition serves a higher purpose.

“Being the first black woman to go into competition doesn’t belong to me,” Diop added. “I’m glad for the people who are sensitive to my film, I’m more than honored to become — if they want — inspiration or something that makes them see that it is possible to make your film as you want it to look like. That’s incredibly touching when I imagine that it can inspire people. It’s so strong to feel that it can move the lines like that. But to be a black woman is not an accomplishment. It’s just a fact.”

Atlantics will be available to stream on Netflix in November.