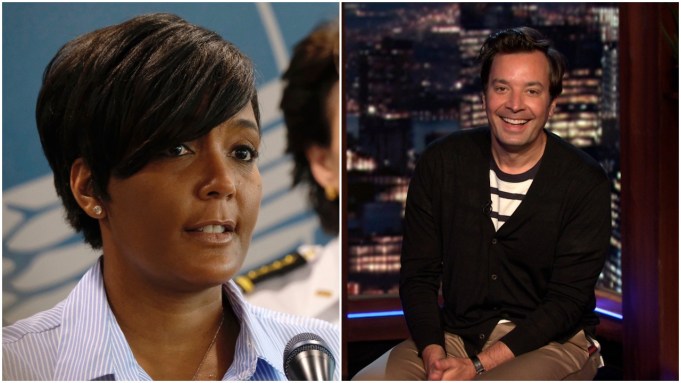 The Tonight Show Starring Jimmy Fallon got some breaking news from Georgia with Atlanta Mayor Keisha Lance Bottoms revealing that she had just come off the phone with Governor Brian Kemp, who is suing her over a mask order.

Earlier this month, Lance Bottoms brought in an executive order rolling back some of the city’s reopening measures and requiring everyone to wear a mask within the city limits. She was subsequently sued in Superior Court by Governor Kemp, who also issued an order suspending all local mask mandates.

“I am personally being sued by the Governor but ironically just before joining you, I had a very good conversation with the Governor so we discussed where we disagree and hopefully we can figure out a way to agree to disagree without having to play this out in court,” she told Fallon on tonight’s show on NBC.

“At the end of the day, we want the same thing, we want people to be safe, we want to stop the spread of COVID-19 and certainly doesn’t help when we’re having to fight.”

Lance Bottoms, the daughter of R&B singer Major Lance and Sugar Hill Records founder Sylvia Robinson, widely considered one of the driving forces behind hip hop, added, “My dad always told me ‘Never let them see you sweat and on your worst day you better get up and look like everything is ok’. I’ve taken that to heart and tried to make him proud.”

See the full video above.