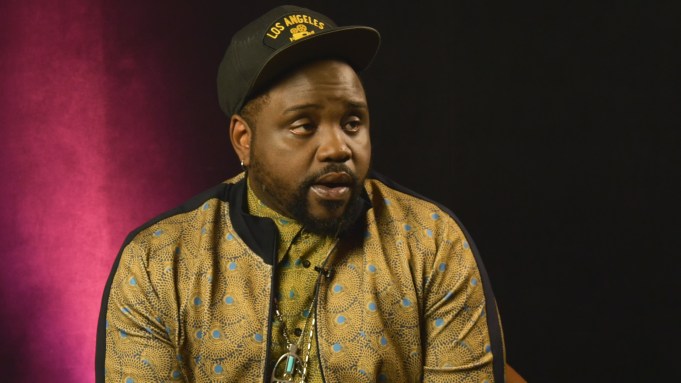 “This season, especially for my character Alfred, was incredibly daunting,” Brian Tyree Henry reveals of the second season of FX’s Emmy winning Atlanta and his up and coming rap star role of Alfred “Paper Boi” Miles.

“He keeps rising, keeps rising, he’s starting to do promotions and doing concerts and things like that but he’s in a town that he’s been born and raised in and he doesn’t know it any more,” the Tony Award nominated Lobby Hero actor adds in this week’s Next Generation TV of his character on the Donald Glover created series.

“This season was about restrain for Alfred,” Henry noted of the exceptional and genre twisting 11-episode Atlanta: Robbin’ Season. “You see a lot of him understanding how to navigate this landscape of fame but also still being naïve to it.”

In particular, Henry was on point and front and center on the unsettling and rambling “Barbershop” and the harrowing “Woods” episodes, both penned by Stefani Robinson. In a show where the minutiae and the high perspective often seamless merger, the Hiro Murai helmed Woods drew from Henry’s own loss of his mother to soak Alfred in displacement in the suddenly unfamiliar. “Grief feels like that,” Henry acknowledges of the sense of being lost in a place you know so well, as Alfred in in the woods of Atlanta. “It feels like you don’t know the land you’re walking on anymore …in this forest of grief, you don’t know where to go.”

A veteran of Broadway and a past Guest Actor Emmy nominee for his This Is Us performance last year as well as one of Atlanta’s stars Henry also has several movies coming out including the Jodie Foster and Sterling K. Brown co-starring Hotel Artemis hitting the big screen later this week. While admitting he didn’t ask Foster about Taxi Driver and saying how much he enjoyed working with close pal Brown, Henry called the near future set flick “very much up my alley, kinda sci-fi, kinda action, kind all those things.”

For more of a look at Atlanta: Robbin’ Season, Hotel Artemis and more of the scope and depth of Brian Tyree Henry’s work, click on the Next Gen TV video above. It is well worth it.

Also you can check out other installments of Next Gen TV such as my May 29 conversation Holly Taylor of The Americans or the May 22 chat with Picnic At Hanging Rock star and Game of Thrones alum Natalie Dormer.