Continue to Deadline SKIP AD
You will be redirected back to your article in seconds
Skip to main content
November 15, 2018 3:49pm 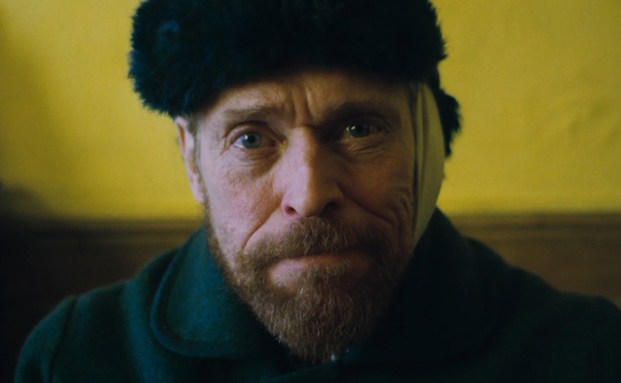 There have been many cinematic takes on the great artist Vincent Van Gogh, notably Kirk Douglas’ Oscar-nominated turn in 1956’s Lust For Life and Robert Altman’s penetrating Vincent and Theo, but director, and artist himself, Julian Schnabel has managed to do something completely personal and original in At Eternity’s Gate. This is probably a movie that could only come from one artist examining the life of another, and Schnabel in his filmmaking efforts has always seemed fixated on those who create in one way or another through his films including Basquiat, Before Night Falls and the extraordinary The Diving Bell and the Butterfly.

Here, though, with the help of a mesmerizing portrayal by Willem Dafoe, he searches for the essence of the great painter in the final years of his life as he lived in Arles and Auver-sur-Oise, France. Working from a script he wrote with Jean-Claude Carriere and Louise Kugelberg and shot in many of the same locations Van Gogh actually lived and worked, Schnabel — by his own admission — attempts to tell Van Gogh’s story from letters he wrote, common agreement on facts of his life, hearsay and pure invention. What works most brilliantly is how he manages to show us the man through the eyes of a painter and his thoughts, which give way to inspiration on the immortal works he created but never lived to see acknowledged. As I say in my video review (click the link above to watch), this is as much a movie about the creative process as it is about one artist and how he sees the world around him.

There is no question that toward the end, Van Gogh was a tortured soul, a man afflicted by many illnesses even to the point of cutting off his own ear. Thankfully this film doesn’t dwell on that aspect;l instead, it eschews the melodrama to present a lyrical portrait of a Van Gogh we’ve never really seen before. Yes, there is a supporting cast including Rupert Friend as his brother, Theo; Oscar Isaac as Paul Gauguin, a fellow artist and one of his few friends; and small scenes with such great actors as Emmanuelle Seigner, Mads Mikkelsen as a priest and Mathieu Almaric, whom the artist meets in one of the institutions where he spent some of his later days. Still, it is the quiet moments that Dafoe has, the singular act of painting landscapes and environment that make this deliberately paced, masterfully directed film as memorable as it is. The music by Tatiana Lisovkaia and exquisite sound design contribute mightily to making us feel like we are there feeling the rustling winds and other things Van Gogh himself experiences.

Kudos to cinematographer Benoit Delhomme for the artistry in his camera, obviously a key component in bringing Schnabel’s vision to the screen. Of course it helps to have someone as skilled as Dafoe, who won the Volpi Cup for Best Actor at the Venice Film Festival in September, to throw himself so emotionally into playing Van Gogh, in much the same way he did in Martin Scorsese’s The Last Temptation Of Christ. He brings simple truth to observations by Van Gogh such as maybe this was a man destined to create art for different generations to come, and sadly not the one in which he lives. A scene where the body of Van Gogh lies stretched out as people casually examine his works of art surrounding him is haunting to see. Incidentally Schnabel taught Dafoe how to paint, and the painstaking detail is evident throughout and never feels false. At Eternity’s Gate is something to savor, a gift from one artist to another and to grateful film fans. Jon Kilik is the producer. CBS Films puts it in limited release on Friday.

Do you plan to see At Eternity’s Gate? Let us know what you think.