Continue to Deadline SKIP AD
You will be redirected back to your article in seconds
Skip to main content
February 11, 2019 5:15pm 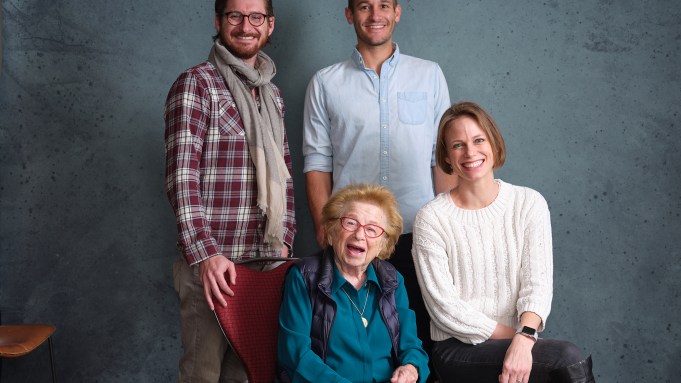 Oftentimes, it’s the Sundance Film Festival that kicks off Oscar’s Best Documentary Feature Race. This season, three out of five Oscar-nominated docs (RBG, Minding the Gap, and Hale County This Morning, This Evening) emerged from the Utah festival. So naturally, with this track record, Dr. Ruth had concrete ambitions in mind, when she sat down at the fest to discuss the doc on her own life. “I want to get an Academy Award nomination,” Dr. Ruth told Deadline outright.

From Ryan White (a Sundance alum behind Netflix docuseries The Keepers), Ask Dr. Ruth follows the icon’s astonishing journey, from her tragic beginnings as an orphan of the Holocaust to the path she claimed for herself, as America’s most famous sex therapist. To be clear, when Dr. Ruth (born Ruth Westheimer) spoke with Deadline, she wasn’t yet campaigning for the gold statuette itself; she simply wanted recognition for White, as well as the film’s producer, Rafael Marmor.

As Dr. Ruth explained, sitting down at Deadline’s Sundance Studio with White, she had been approached over the years by many filmmakers interested in telling her life story—and she turned them all down. Feeling that she had enough media presence without a doc on her past, Westheimer was also reluctant to examine her early years, and the trauma that shaped her life.

Coming to White via Marmor, Dr. Ruth watched all of the projects he’d directed, including The Keepers (“That really was a cliffhanger!”). She saw something in his work and, joining him for dinner in New York, knew he was the artist to trust with her life story. “He’s a brilliant filmmaker, but he also learned a lesson. He learned that people like me, out of Germany, out of bad, bad happenings, people like me don’t cry in public,” she said with a defiant grin. “He tried to make me cry—no luck. No luck whatsoever.”

Traveling around the world with Dr. Ruth for a year and a half of shooting, as she published three books and taught two university classes, White marveled at the fact that she “still goes a mile a minute.” Like so many, White “grew up with Dr. Ruth’s voice being ubiquitous throughout the house, knowing that she was the sex educator.” What he didn’t know then was the “55 years of challenges” the sex therapist endured before becoming a household name.

Making Ask Dr. Ruth was certainly a learning experience for White, and it’s Dr. Ruth’s hope that others too can learn from her experience. Without mentioning President Donald Trump directly, she used the opportunity of the promotional circuit to allude to the actions he’s taken, as President, and the damage they have caused. “I’m not involved in any political party; I vote every single election, but I’m very sad today when I see families being separated. When I see children being separated from their parents, it reminds me and makes me very, very sad of what I had to go through, when I had to say goodbye to a loving family, being an only child, and never see them again,” Dr. Ruth explained, also calling for the preservation of abortion rights.

Perhaps in viewing Ask Dr. Ruth, the personal can become political, even as Westheimer continues processing her own deep sense of loss. “This film is really a testimonial to the parents that I lost at the age of ten and a half, when they placed me on a train to safety in Switzerland,” she said. “It’s like setting a gravestone for my whole family, who don’t have graves.”

“That was in the back of my mind,” Dr. Ruth added, “and then I also wanted to show, Look at what can happen, out of such a tragedy, of an orphan.”

Backed by Hulu, Ask Dr. Ruth will hit theaters and the streaming platform on May 10th. For more from our conversation with Ryan White and his candid documentary subject, take a look above.