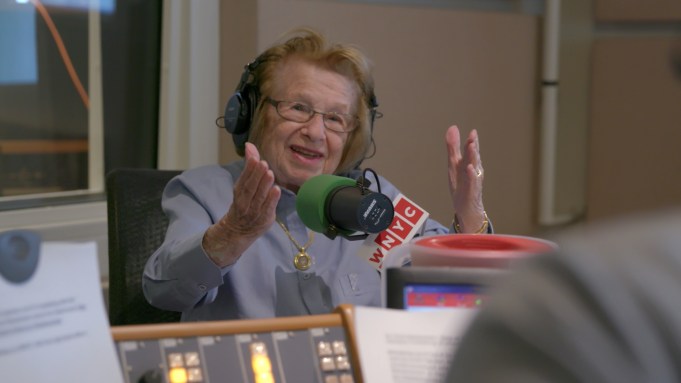 For almost four decades, Dr. Ruth Westheimer has been known as the sweetly unfiltered and honest sex therapist that shared her wisdom via radio, books, TV and her own show. She has since become a pop culture icon and her name has been synonymous with sex. Even so, it’s surprising that no one has made a documentary about her. Enter filmmaker Ryan White, a documentarian who decided to shed light on the life of Westheimer in the docu Ask Dr. Ruth and, surprisingly, it wasn’t chock full of endless sex talk.

“When I look at the final product, I am actually surprised at how it ended up,” White said during a Q&A after the film at Deadline’s For the Love of Docs screening series. “If you asked me at the beginning, I would have thought it would be a lot more about sex than the film actually is.”

He added, “The most surprising thing about Dr. Ruth is that she virtually never talks about sex…so much about the film is about her life outside of that.”

Although the Hulu docu talks about her career as a sex therapist, it is very much about her life as a whole — and she is more than just talking about relationships and the perfect orgasm. White said that when many people watch the film, they come out saying that it was very much an emotional blow.

“The film is a lot sadder and heartbreaking than I expected,” he said. “I also didn’t know Dr. Ruth’s backstory until I met her and she told me she was a survivor of the Holocaust.”

Westheimer kept diaries and letters from that age and allowed White to use her literal voice from that time in her life in the movie. Her survival story became part of the film and further shows the importance of representation, inclusion and storytelling from diverse voices.

Because of her past, White said that she has become very outspoken about refugees and kids being taken away from the border. “She has talked repeatedly about how her story is an American dream story and when we shut off our borders to refugees we are shutting out stories like hers,” White points out.

“Part of the magic about Dr. Ruth is that everybody loves her to a disappointing degree because there is very little controversy,” White continues. “Even the most Republican and conservative politicians love her as well…no one would argue that Dr. Ruth is beloved but her story, as she always said could only happen in America.”