Continue to Deadline SKIP AD
You will be redirected back to your article in seconds
Skip to main content
June 11, 2020 4:22pm
1Comments 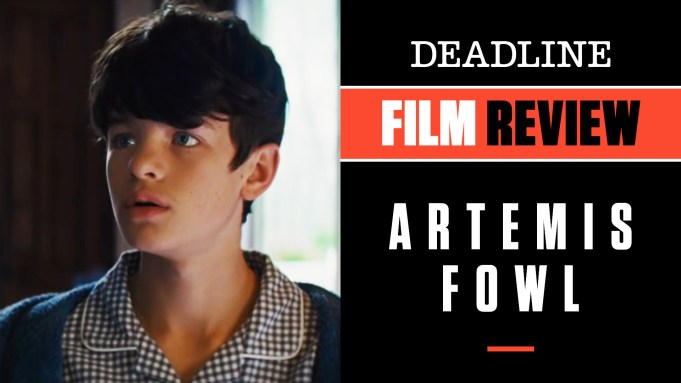 The brilliant actor and director Kenneth Branagh has an impressive film legacy behind the camera with sterling Shakespearean adaptations from Henry V to Hamlet, the dazzling recent remake of Murder on the Orient Express and big-scale Disney movies Thor and Cinderella, the latter in my book being far and away the best live-action take on an animated classic.

But sadly his latest effort for the Mouse House is a strictly by-the-numbers film version of the first couple of books (combined here) of Irish author Eoin Colfer’s Artemis Fowl series. Although the lead character in the books is somewhat edgy and darker than your average YA novel kid, this effort has been Disney-fied to a distressing degree, basically taking all the fun and quirkiness from the tale of a genius 12-year-old who is the latest in a long line of family criminal masterminds.

Artemis Fowl is strictly limited to appeal to its target audience, which probably will accept the film for what it is: overproduced CGI and special effects-laden visuals thrown in to cover up a distinctly unappetizing fantasy that likely was meant to be a franchise-starter in the vein of Harry Potter or even Percy Jackson. You probably can forget about that. Disney had moved this around its theatrical release schedule and finally used the worldwide coronavirus pandemic to instead launch it on its new streaming service, Disney+, where it’s likely to be an outsized success. It is the right move because this would have flamed out quickly in theaters after initial sampling, at least compared with other films of this ilk. It still runs the risk, and fan disappointment, for neutering its title character, and though he gives it a game try — putting on those MiB-style dark glasses to appear cool — newcomer Ferdia Shaw is overwhelmed by all the busy effects work.

Plot-wise, Artemis Fowl Sr. (Colin Farrell), a criminal mastermind par excellence, has been kidnapped by nefarious forces — a development that leads his uber-bright son to set out and rescue him. To do that, he must pay a unique ransom (specifically the very evil Opal Koboi), one that leads him to an ancient underground civilization of fairies led by the no-nonsense Commander Root (Judi Dench). Fowl Jr. somehow must get his hands on the Aculos (stolen, apparently, by Dad), the fairy world’s most prized possession with its extraordinary powers. What to do?

He sets a plan in motion with help from a ragtag group including a giant dwarf named Mulch Diggums (Josh Gad), whose own motivations are highly questionable; a shining-star pixie named Holly Short (Lara McDonnell); and the ever-loyal and imposing Butler (Nonzo Anozie) and briefly seen Juliet (Tamara Smart). This all leads to a battle of wits with the fairie clan, and endless EFX sequences that are serviceable at best when they instead should sparkle. The problem with a movie that promises magic is that what’s onscreen is just a series of familiar computer-generated tricks that lack innovation. Been there, seen that.

Again, this probably will be just what the doctor ordered for entertainment-starved young ones who have been waiting for a screen version of Artemis, one that comes at an especially welcome time for families still stuck largely in quarantine. However, as a launch — of sorts — to large-scale summer tentpole-style movies, it comes as a disappointment to just about anyone else, especially Branagh fans. This one is near the bottom of the pile in an otherwise smart and stylish filmography.

Conor McPherson and Hamish McColl supplied the script and throw in some occasionally wink-wink dialogue and wisecracks (mostly from the mouth of Gad), but they do no favors for young Shaw, who doesn’t have the chops to make Artemis come alive onscreen. Veteran pros like Farrell and Dame Dench do what they can, but only Gad seems to have his heart in this. McDonnell does make a charming fairy, and Anozie is a welcome presence during his screen time.

Producers are Branagh and Judy Hofflund. Interestingly the notorious Harvey Weinstein originally was producing this, but that plan changed for obvious reasons. Disney + begins streaming it Friday, but if you hit the service to see this, be sure to check out another movie currently playing, Togo with Willem Dafoe and some brilliant sled dogs. Now that’s a great family movie not to be missed. Check out my video review of Artemis Fowl with scenes from the film at the link above.

Have a different opinion? Let us know what you think.