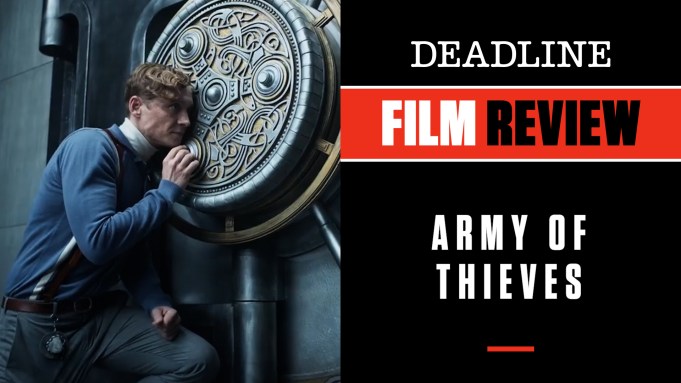 Earlier this year I had to drag myself reluctantly to watch Zack Snyder’s Vegas-set zombie-apocalypse Netflix movie Army of the Dead, but once on board I was a total convert, a new devotee of Snyder’s wild and wacky take on the undead in the city of sin. A sequel is in the works, as well as a cartoon series, but almost simultaneously Snyder and company also produced a prequel called Army of Thieves, for which German star Matthias Schweighöfer not only stars but also directs. Those who saw Army of the Dead will recall the sheer appeal of this actor playing a master safecracker named Ludwig Dieter out to help recover $200 million buried in the remains of a Vegas Strip hotel overtaken by the zombie invasion. In addition to getting the money, he also stole every scene he was in — lock, stock and barrel.

Army of Thieves, apart from some brief TV newscast references to an impending zombie war on Vegas and a couple of nightmares for our star in that regard, is a smart take on another movie genre altogether: the well-worn heist film in which a ragtag group of thieves try to pull off the impossible. The Italian Job — both versions — seems to be the template here, though there are echoes of everything from the Ocean’s films to Rififi. Snyder, who co-wrote the story with Army of the Dead screenwriter Shay Hatten and also is a producer, clearly recognized the international crossover potential of Schweighöfer, who has been a star for some time in his native country and even directed a six pack of movies. He definitely has the chops and style to pull this one off, not only as star but also behind the camera with a lusciously shot European-set romp that doesn’t break new ground in the heist-movie universe but nevertheless marches to its own beat with a large degree of success.

Schweighöfer’s Sebastian Schlecht-Wohnert, as we meet him, is a bored bank teller whose big hobby and interest is the art of safecracking. He shares this passion on his own YouTube videos, and the film begins with one of those as he explains his admiration for Hans Wagner (Christian Steyer), who legendarily created four impossible-to-penetrate safes all based on the Wagnerian opera Ring Cycle.

He surmises that three of them are known to exist in Paris (the Rheingold), Prague (the Valkyrie) and St. Moritz Switzerland (the Siegfried). The whereabouts of the fourth, the Gotterdammerung, remains something of a mystery. Gwendoline (a terrific Nathalie Emmanuel) is the ringleader of a burgeoning group of international thieves determined to find someone to help crack these safes (and by the way, the distraught Wagner managed to meet his demise by burying himself in a safe that landed on the bottom of the ocean), and she lures Schlencht-Wohnert (who later will take on the moniker of Ludwig Dieter) to a safecracking competition he enters and actually wins.

‘Army Of Thieves’ Trailer: A New Heist Is On In ‘Army Of The Dead’ Prequel

This begins his association, and growing romantic infatuation, with Gwendoline, who is all business as she also recruits computer whiz Korina (a fun Ruby O. Fee), getaway driver Rolph (Guz Khan) and action-star wannabe Brad Cage (Stuart Martin), the latter also romantically involved with her but soon finding Sebastian to be a nerdy rival. In no time they are off to these picturesque European hot spots where, one by one, Sebastian unlocks riches with his skills in safecracking. It gets complicated when the team’s inner conflicts set them on their own paths as all are pursued by determined Interpol officers Delacroix (Jonathan Cohen) and Beatrix (Noemie Nakai).

Schweighöfer clearly knows what is required of the genre, but in the end it is his goofy, nerdish charm, romantic longings for Gwendoline and ability to bounce back against Cage and evade Delacroix that keep us engaged with him throughout. Yes, we see the connections to where he will eventually get involved in the zombie wars of Army of the Dead, even with a couple of cameos at the end, but this prequel truly stands on its own as a swell introduction to an irresistible movie character. His command of filmmaking also sets this German icon up for a career that deservedly should take on international stardom with this his first English-language film as director and star.

It is a lot of fun, and all the production credits are aces including the score from Hans Zimmer and Steve Mazzaro, cinematography from Bernhard Jasper and snappy editing by Alexander Berner. Producers are Snyder, Deborah Snyder, Wesley Coller, Dan Maag and Schweighöfer. Check out my video review with scenes from the film at the link above. Netflix begins streaming it on Friday.

Do you plan to see Army of Thieves? Let us know what you think.