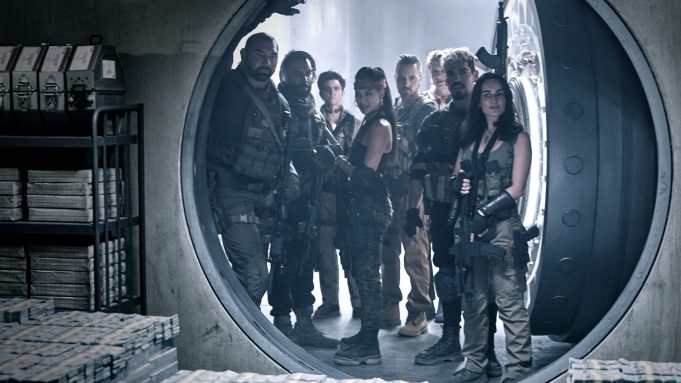 The undead have walked — well, hobbled — among us for decades now, per Hollywood. But this particular zombie apocalypse has a few twists. Check out the first full trailer for Zack Snyder’s Army of the Dead above, complete with an eerie take on Kenny Rogers’ “The Gambler.”

Dave Bautista stars as Scott Ward, a former zombie war hero who has settled into a simpler life flipping burgers on the outskirts of Las Vegas. But things change when a casino boss (Hiroyuki Sanada) offers him $50 million to break into the zombie-infested quarantine zone to retrieve $200 million sitting in a vault beneath the Strip within 32 hours — before the city is nuked by the government.

One itty-bitty catch with these zombies: “They’re not what you think they are. They’re smarter, they’re faster, they’re organized.” And among them are an undead Elvis impersonator and a zombie tiger. One of the team opines about the latter, “That’s crossing a line.”

Justice League‘s Snyder directs from a script he wrote with Shay Hatten and Joby Harold, based on a story by Snyder. He also served as DP and produced the pic with Deborah Snyder and Wesley Coller.

Netflix opens Army of the Dead in theaters on May 14, followed by the streaming debut a week later. Here is the new key art: