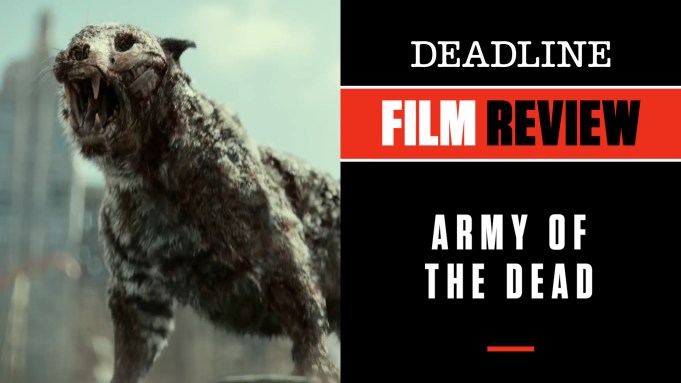 It took a trip backwards to the spirit of his 2004 zombie flick Dawn of the Dead for Zack Snyder to finally reclaim his groove, but that he has done with Netflix’s super Army of the Dead, which can probably best be described as The Walking Dead meets Ocean’s 11, with a touch of Escape From New York and The Dirty Dozen thrown in for good measure. What Snyder clearly is showing with this near-two-and-a-half-hour epic of the undead is that he is capable of once again having fun making this stuff, and by extension making sure we have a blast too. Maybe it was just getting away from the DC comic book canon over at Warner Bros that has unleashed his inner movie geek again, but I will take this Army over the likes of his too dark and uneven dips into the worlds of Batman, Superman, Watchmen and the newly bloated Justice League — and definitely over the misfire of Sucker Punch.

Snyder proves here that with the right material and attitude he is an artist in control and hitting his own zeitgeist again. Funnily enough, it apparently took a trip to Netflix to do it for him, and ironically he has lightened things up with a film that almost demands to be seen on the big screen; it’s not really a streaming kind of attraction in terms of full power. Netflix will in fact be releasing it first to theatres Friday and then join with the streaming option May 21. No matter how you see it, see it.

With a story credited to Snyder and screenplay by the director along with Shay Hatten and Joby Harold, the plot revolves around a zombie war that results in the Las Vegas Strip turning into an apocalyptic nightmare vision of complete destruction, now walled off by the government as the remaining zombies roam what’s left of the casinos and hotels surrounded by McCarran Camp, a refugee zone of mostly poor people harassed by nasty security guard Burt Cummings (Theo Rossi). The U.S. government however comes up with a final solution to this problem with a plan to drop a nuclear bomb on the zombie-fied Vegas on none other than the Fourth of July, the ultimate fireworks ending in the Dead Zone. Enter billionaire Bly Tanaka (Hiroyuki Sanada), owner of the Olympus Hotel who is scrambling to save his fortune of $200 million sitting in the abandoned vault under the hotel. To this end he brings in legendary zombie hunter and warrior Scott Ward (Dave Bautista) with the promise of millions of dollars in payment if he and his team can go in and retrieve the money from the vault and get it out safely.

Ward, now flipping hamburgers for a living on the outskirts of town, is seduced by the offer and puts the band of mercenaries back together to go in and take the cash. They include his estranged daughter Kate (Ella Purnell) who sees this as a way to help and also reconnect with dad, Vanderohe (Omari Hardwick), Maria Cruz (Ana de la Reguera), the crafty and sly Lily aka The Coyote (Nora Arnezeder), Mikey Guzman (Raul Castillo) and Chambers (Samantha Win) among others along for the ride. In addition to the zombies, they must also bang heads with Tanaka’s security head Martini (Garret Dillahunt), who has plans of his own. Tig Notaro makes a strong impression on the team as the helicopter pilot who is in it solely for the cash rewards. Though it is deemed impossible to fly into walled-off Vegas, Tanaka assures there is a chopper sitting on the pad atop his hotel with which they can make the getaway with the loot. It isn’t what it was cracked up to be. The gang also most importantly includes a crackerjack German safecracker Dieter (a highly amusing Matthias Schweighofer).

Snyder delivers the action nonstop with lots of detours into danger and bloodletting moments for this group of ragtag warriors who find themselves up against formidable zombie talent including leader Zeus (Richard Centrone) and the gooey Queen (Athena Perample) who has a real head for action. Wandering through the smoldering ruins of the strip is a zombie white tiger refugee from the Siegfried and Roy show we are told. Hilarious.

Along the way there are nods to Vegas staples like Liberace, and if you want to see a zombie Elvis impersonator you have come to the right place. Snyder doesn’t miss a beat in exploiting every angle of this wild heist, and acting as his own cinematographer for the first time shoots the hell out of it with exceptional help from Julie Berghoff’s fabulous production design, Dody Dorn’s ace editing, sensational visual effects and a terrific score from Tom Holkenborg. Producers with Snyder are Deborah Snyder and Wesley Coller.

It is all nicely set up for prequels, sequels and an upcoming cartoon series spinoff Army of the Dead: Lost Vegas.

Check out my video review above with scenes from the film. Do you plan to see Army of the Dead? Let us know what you think.