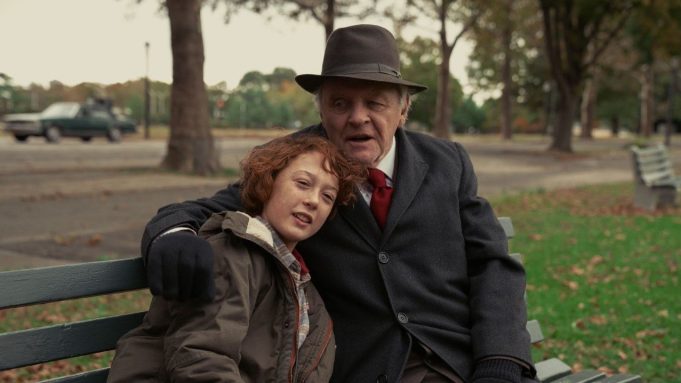 Specifics as to the plot of the film, inspired by Gray’s upbringing in Queens, New York during the 1980s, have for the most part been kept under wraps. But the pic is billed a deeply personal story on the strength of family, the complexity of friendship and the generational pursuit of the American Dream.

Hathaway and Strong play Irving and Esther Graff — versions of Gray’s parents — with Hopkins as a version of his grandfather, named Aaron Graff. Gray’s adolescent stand-in is played by Banks Repeta, who in the trailer discusses his desire to be an artist, and pursues a friendship with the character of Jaylin Webb, not knowing how to contend with the racism with which the latter is confronted. Hopkins’ Aaron urges his grandson to be a “mensch” and stand up for his friend, even as the boy’s own mother tells him not to associate with him.

Repeta’s character is ultimately sent away to a private school, with Strong’s Irving making the following plea. “I want you to be a whole lot better than me. Life is unfair,” he says. “Be thankful when you get a leg up. You make the most of your break and do not look back.”

Written and directed by Gray, Armageddon Time premiered to a seven-minute standing ovation at this year’s Cannes Film Festival. The film more recently played Telluride and will next head to the New York Film Festival as a main slate selection, as well as part of a special 60th anniversary screening event celebrating the festival’s history.