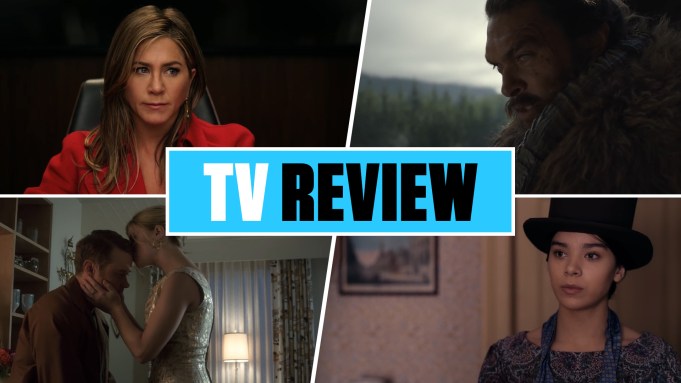 UPDATED,7:47 AM: The next battle in the long-anticipated streaming war is underway with the debut this morning of Apple TV+, with the tech giant sending a quartet of new shows onto the field to firmly plant its flag.

Costing $4.99 a month or free to anyone who has recently purchased a new iPhone, iPad or Mac laptop, the new service from Tim Cook’s trillion-dollar market-capped company has series from Steven Spielberg, Oprah Winfrey, Jon M Chu and more big names in the pipeline as it prepares to take on Netflix, Amazon and Hulu and the upcoming Disney+, HBO Max and NBCUniversal’s Peacock.

However, right now, what will be the show you have to watch this week from the first round of Apple TV+ offerings that launched at midnight? You’ll have to watch the video review above to find out.

Having captured a moment because of the renewed spotlight on the downfall of alleged predator Matt Lauer and the chaos at the Today show and NBC News thanks to Ronan Farrow’s Catch & Kill bestseller and Jennifer Aniston’s Instagram debut, The Morning Show has zeitgeist stamped all over it. Pulling back the curtain on the sharp-elbow office politics and inner sanctum secrets of morning TV, the series starring Aniston, Reese Witherspoon and Steve Carell snared an initial two-season order from the Jamie Erlicht- and Zack van Amburg-led Apple TV+. Dropping a trio of episodes on Friday after a rough ride to it debut, the 10-episode first season of high production value and Jay Carson-created The Morning Show also features Billy Crudup, Mark Duplass, Gugu Mbatha-Raw, Karen Pittman, Bel Powley, Desean Terry and Janina Gavankar.

As Saturday Night Live fans saw this weekend, Jason Momoa is showing up almost everywhere to promote the Steven Knight-written and Francis Lawrence-directed See. Set 600 years in the future in a decimated America where human beings have lost the power of sight and retreated to a new Dark Ages subsistence, the allegedly $15 million-an-episode series led by the Aquaman star and Alfre Woodard has swords, an evil queen and a possible new beginning with newborn twins who can, hence the title, see. Stamped with a classic Herod and baby Jesus tale, See clearly has its eyes on the prize of that Game of Thrones audience who are looking for a new show now that the HBO saga is done.

Officially renewed for a second season earlier this month, the Ronald D. Moore-, Matt Wolpert- and Ben Nedivi-created For All Mankind unveils an alternative history in which the USSR made it to the moon first and the trajectory of contemporary history took off in a very different direction in response. A big investment for Apple’s large small-screen ambitions, the 1960s- and 1970-set 10-episode first season of the NASA drama from Sony Pictures Television and Tall Ship Productions stars The Killing vet Joel Kinnaman, Patriot’s Michael Dorman, Sarah Jones, Shantel VanSanten, The Looming Tower’s Wrenn Schmidt and The Crown’s Jodi Balfour – and a lot of repurposed historical footage.

Unlike the other Apple TV+ shows launching this week, Dickinson will drop all of its poetic first season in one batch November 1. Based on the life of Emily Dickinson, this series created by Alana Smith and executive produced by David Gordon Green stars Oscar nominee Hailee Steinfeld as the poet of paradox herself in a coming-of-age tale set in the 19th century but very contemporary in some many ways.

So, will it be See, Dickinson, For All Mankind or The Morning Show that you have to watch on Apple TV+ this week? Like I said, you’ll have to watch my video review above to find out.