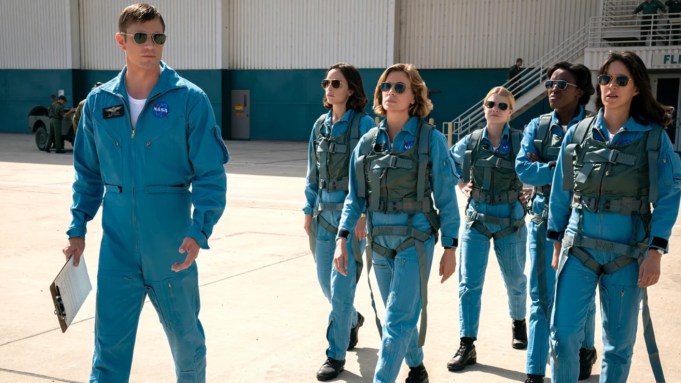 “It’s basically telling the story of the space race, but that’s really part of a larger story,” declares For All Mankind executive producer Ronald D. Moore of the upcoming AppleTV+ series set to debut on November 1. “It’s the change of society, it’s a change of the United States and then the world community as a result of stepping more strongly out into space,” the Battlestar Galactica
alum and Outlander boss adds – as you can see in my interview with Moore in the video above.

A flagship show of the Tim Cook-run tech giant’s much anticipated expansion into the streaming wars, For All Mankind unveils an alternative history where the USSR made it to the Moon first and the trajectory of contemporary history took off in a very different direction in response.

“At some point, mankind starts to come together as one world community and the Cold War competition between the United States and the Soviet Union becomes less relevant and actually the two powers start to hopefully cooperate,” Moore explains from the incredibly detailed set of the Sony Pictures Television and Tall Ship Productions show.

Moore will be on stage today at New York Comic Con with some of the cast of For All Mankind to show a sneak peek of the 10-episode first season of the series to fans.

In our chat beforehand (which you can watch above), Moore explained the distinctness and the opportunities he experienced in working with Apple on the NASA fueled series. “It’s a different culture, it’s a culture of tech and its now a culture of tech marrying into Hollywood,” the EP states.

“We’ve definitely had conversations with Apple about beyond the frame of the TV show,” Moore says. “There’s other things we’re thinking of doing on the platform that would allow us to tell more and more of the story than what’s contained literally in the linear episode each week.”

Long story short – “I have been given all the toys, it’s kind of a dream come true.”

Created by Moore, Matt Wolpert and Ben Nedivi, For All Mankind is a big investment for the Cupertino HQ’d corporation with initial plans for at least three season and likely more. The 1960s- and 1970-set first season of the big-budget drama, which Apple has kept on a Manhattan Project secrecy status the past year, stars The Killing vet Joel Kinnaman, Patriot’s Michael Dorman, Sarah Jones, Shantel VanSanten, The Looming Tower’s Wrenn Schmidt and The Crown’s Jodi Balfour.