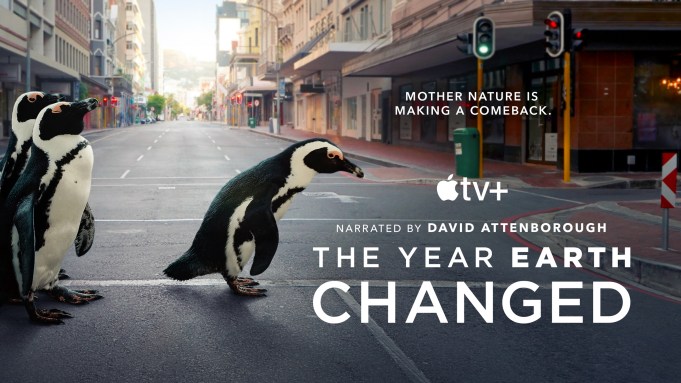 Apple TV+ has greenlit a natural history special narrated by David Attenborough, which will examine how changes in human behavior during lockdown had a profound impact on the natural world.

BBC Studios’ Natural History Unit will produce The Year Earth Changed, which will premiere on April 16 ahead of Earth Day 2021. A second season of Paul Rudd-narrated Tiny World and Tom Hiddleston-voiced Earth At Night In Color will also drop on the same day.

Here’s the logline for The Year Earth Changed: “Showcasing exclusive footage from around the world after an unprecedented year, The Year Earth Changed is a timely documentary special that takes a fresh new approach to the global lockdown and the uplifting stories that have come out of it.

“From hearing birdsong in deserted cities, to witnessing whales communicating in new ways, to encountering capybaras in South American suburbs, people all over the world have had the chance to engage with nature like never before. In the one-hour special, viewers will witness how changes in human behavior — reducing cruise ship traffic, closing beaches a few days a year, identifying more harmonious ways for humans and wildlife to coexist — can have a profound impact on nature.”

A trailer for the documentary is above. It is directed by Tom Beard, while the executive producers are Mike Gunton and Alice Keens-Soper.

Tiny World returns for a six-part season, offering a unique perspective into the natural world by illuminating the ingenuity and resilience of the planet’s smallest creatures. The series is made by UK producer Plimsoll Productions, with Tom Hugh Jones, Grant Mansfield, and Martha Holmes executive producing.

Another British producer, Offspring Films, is behind the second season of Earth At Night In Color, which uses cutting edge camera and editing technology to reveal nature’s nocturnal wonders with striking clarity. Pumas, polar bears, and manta rays all feature in the Alex Williamson executive produced series.