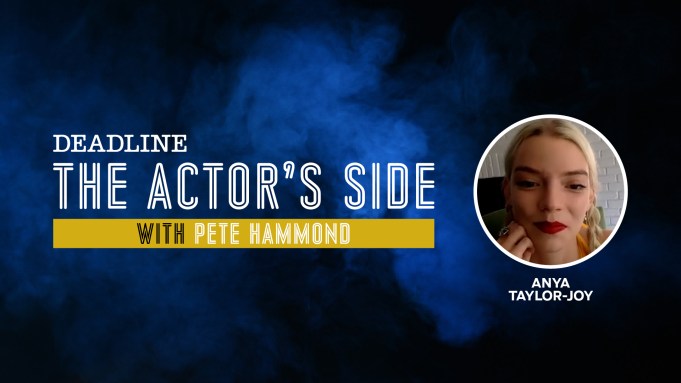 Anya Taylor-Joy has been having quite a season. She virtually swept the early television awards season for her role as Beth Harmon in the widely acclaimed The Queen’s Gambit, grabbing Lead Actress awards from the Golden Globes, SAG, and Critics Choice among others. Now she course nominated, and a leading contender, for Outstanding Lead Actress in a Limited Series or TV Movie at the Emmys, where the competition is formidable, but Taylor-Joy is riding a wave of momentum that could well pay off on Sunday, September 19.

She joins me for this special Monday edition of my Deadline Video series The Actor’s Side as we discuss how she dove headfirst into this role, how she found a unique approach to being so convincing as a chess wunderkind, how her ballet training helped and why she so strongly related to the role.

In addition to Queen’s Gambit, we run the gamut of her young but extraordinary career to date — from the unusual story of how she was discovered to the instant success of her film debut in The Witch for director Robert Eggers — and winning a Gotham Breakthrough Award in the process – and why it was important to drop out of school and pursue a career at the exact time she did. It certainly looks like a good decision. We talk all about the wealth of upcoming roles that is turning her into a superstar. They include the untitled new David O. Russell film opposite Robert De Niro, Mike Meyers, Christian Bale and others; Viking saga The Northmen opposite Nicole Kidman for Eggers; Edgar Wright’s Last Night in Soho, premiering in Venice; and the Mad Max prequel in which she plays the young Furiosa. Quite a plate.

Check out our conversation at the link above to get the ‘Actor’s Side’ of things from Anya Taylor-Joy.

Check out a new edition every Wednesday as well during Emmy season.