Continue to Deadline SKIP AD
You will be redirected back to your article in seconds
Skip to main content
July 27, 2022 11:00am 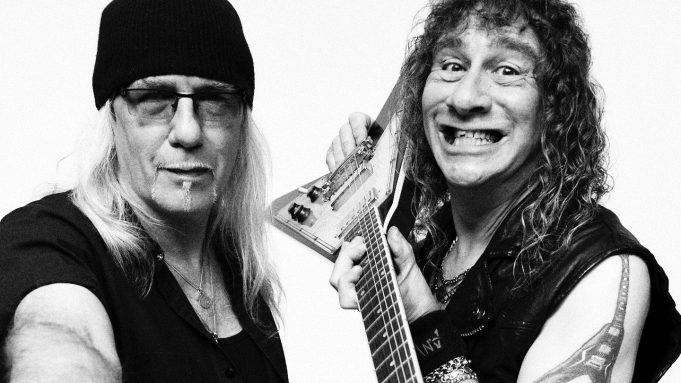 EXCLUSIVE: Utopia is set to release the remastered documentary, Anvil! The Story of Anvil alongside Portobello Electric in theaters this fall and on digital later this year.

The rerelease is timed to the film’s 13th year anniversary and features remastered picture and sound, as well as a new exclusive epilogue interview with director Sacha Gervasi (My Dinner With Hervé, Hitchcock) and Anvil’s Steve “Lips” Kudlow and Robb Reiner moderated by former MTV host Matt Pinfield.

The special event premiere and performance will be presented in conjunction with Beyond Fest on September 22 in Los Angeles at the Saban Theater, with a live concert by Anvil and appearances from surprise musical guests. This will be followed by a Q&A with Kudlow, Reiner, producer Rebecca Yeldham and Gervasi, moderated by Steve-O from Jackass. Tickets for the event went on sale today here.

Anvil! The Story of Anvil follows Canadian heavy-metal band Anvil as they delivered a highly influential 1982 album Metal on Metal that would inspire the likes of Anthrax and Metallica, and then dropped off the map to begin what would become decades of toiling in obscurity. Director and former Anvil roadie Gervasi follows guitarist Kudlow and drummer Reiner as they stumble through a harrowing European tour and reflect on failure, friendship, resilience and the will to follow even the most impossible of dreams.

“This film is pure magic,” said Utopia CEO Robert Schwartzman. “As well as being a brilliant filmmaker, Sacha was in the right place at the right time and has managed to bring audiences a truly inspiring film which has stood the test of time.”

“If you’d told me all those years ago at Sundance, when we had no buyers, that this movie would be released into theaters for the second time 13 years later I never would have believed you, but here we are. It truly is a miracle.” said Gervasi. “This is all thanks to Robert and his extraordinary team at Utopia. They’re brilliant to work with because they’re filmmakers themselves, and their support and passion are unmatched. All Anvil and I can say is thank you!”

The film was produced by Yeldham, and executive producers include Gervasi, Rick Krim and Christopher Soos. The release deal was negotiated by Danielle DiGiacomo for Utopia, and Jeff Springer on behalf of the Anvil team. Gervasi is represented by CAA, Kaplan/Perrone Entertainment, and Lichter, Grossman, Nichols, Adler, Feldman & Clark.

Featuring appearances by an array of heavy metal icons, including Metallica’s Lars Ulrich, Guns N’ Roses’ Slash, Motörhead’s Lemmy, Anthrax’s Scott Ian, and Slayer’s Tom Araya, Anvil! The Story of Anvil (2009) received widespread critical and public acclaim following its release. The film is tied for sixth place as one of the highest rated documentaries of all time on Rotten Tomatoes and won several awards including Best Documentary from the Spirit Awards, Best Feature Documentary and Music Film at IDA, and the Emmy for Outstanding Arts & Culture Programming.