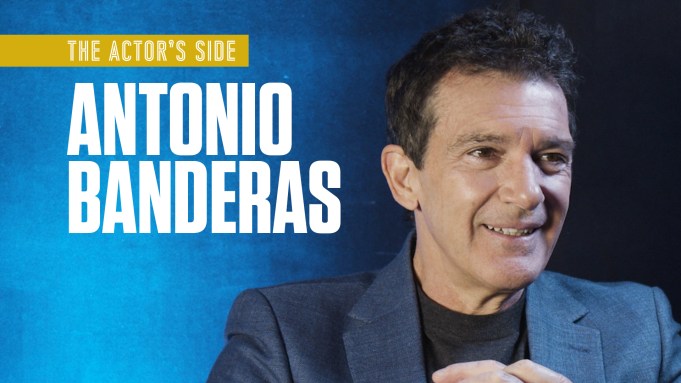 On this week’s edition of my Deadline video series The Actor’s Side, Antonio Banderas visits our studio to discuss his latest film, and eighth collaboration with Pedro Almodóvar, Pain and Glory. This is the film that won Banderas the Best Actor award at this year’s Cannes Film Festival, and has put him front and center in the Oscar race as well.

While a Tony-nominated Broadway star for Nine and a recent Emmy nominee for Genius: Picasso, Banderas has never been nominated for an Academy Award. But oddsmakers are betting that is about to change with his performance as a film director dealing with health problems, aging and memories  in a role that could be based on Almodóvar himself, or certainly aspects of his life.

In our wide-ranging conversation, Banderas talks about how his own bout with a coronary problem helped him bring this role to life, how close the character is actually to Almodóvar, and how the director detected a change in his longtime star’s personality and vulnerability that made their latest team-up perhaps the most poignant and memorable. Banderas also talks about his return to the stage, directing and playing Zach in a debut production of A Chorus Line in Malaga, Spain, where the actor is opening his own theater company — another event in his life he says that is directly attributable to his health scare and the realization that the only thing certain in life is death.

Banderas also discusses how he didn’t know a single word of English when he was brought to Hollywood in the early 1990s for a role in The Mambo Kings, a part he had to learn phonetically. He says that because he couldn’t speak English when he arrived from Spain, it was especially significant he was asked to voice a role in an animated film when he played Puss ‘N Boots in Shrek, still one of his favorite roles. And mine.

Click on the video above to check out our conversation.