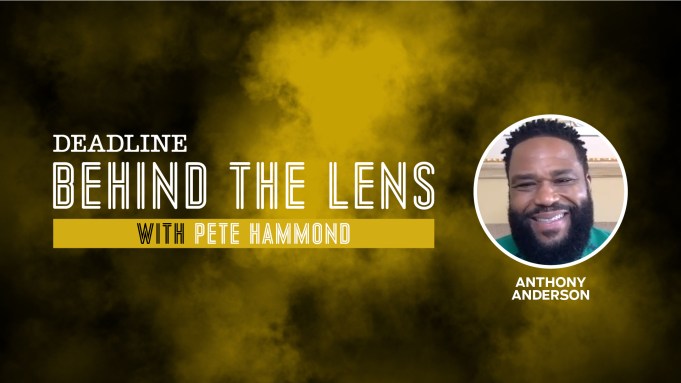 Seven Emmy nominations in seven seasons as the father Andre “Dre” Johnson in ABC’s stalwart comedy series Black-ish and Anthony Anderson still doesn’t have an actual statuette on his mantelpiece. Anderson reminds me in this week’s edition of my Deadline video series Behind the Lens that his mother Doris tried to steal one for him at the Emmys awhile back, in a memorable bit on the broadcast, but still — doesn’t a track record of 7-for-7 indicate that the actual win might not be the victory but rather strong recognition from your peers that this is one of the most consistently excellent performances in the current TV comedy landscape?

We talk about why Anderson refers to himself as the Susan Lucci of the category (the soap star finally won in 1999 after 19 straight Daytime Emmy nominations), but after this season he will have one last chance because Black-ish will be ending after its upcoming eighth season. It’s not a decision that Anderson says was his, as he still feels there is a lot of life and importance in carrying on the saga of the Johnson family, something he has quite a bit of say in as he is also an executive producer — and he works just as hard behind the lens on the show as he does in front of it.

Anderson, in fact, is a very prolific producer in television these days while also doing double duty as host and EP of ABC’s hit game show To Tell The Truth, which also features a prime spot on camera for his Mama Doris. He tells me she always has wanted to be in the spotlight and never could do it, so this is his way of paying her back. Anderson has also served as EP on the Black-ish spinoffs, Mixed-ish and Grown-ish, and has done the same for some choice food shows like Eating America, as well as a previous short-lived sitcom All About the Andersons.

Recently he served as a guest host for several episodes of Jimmy Kimmel Live! and tells me a talk show is definitely part of his future ambitions after black-ish. And although he wouldn’t give any details about how the series will wrap, he is thankful they will be able to craft a proper sendoff for a show, for which he is also nominated as EP in the Outstanding Comedy Series Emmy category, its first appearance there since 2018. (Overall, the series has 24 nominations but only a single win for Hairstyling. It’s way overdue.)

Anderson is proud that the series has tackled — and continues to tackle — racial and social issues of the day, merging them with comedy but never for the sake of a laugh. It is a show on network television that will be missed, although, as I point out, it can be seen in all its seven-season glory on Hulu. That includes the infamous episode “Please, Baby, Please,” which never aired on ABC (did it have something to do with Trump?). But Anderson asks why and wants us to look at that episode and figure out how ABC could have been so concerned. It is a good question, and an example of why Black-ish is still so necessary.

To watch our conversation as Anthony Anderson takes us “Behind the Lens,” just click on the link above.

Check out a new episode of Behind the Lens every Friday during Emmy season.