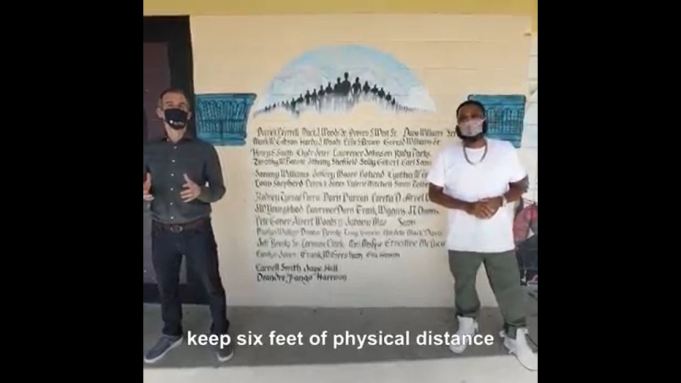 Black-ish star and newly minted Emmy nominee Anthony Anderson and Los Angeles Mayor Eric Garcetti have teamed to produce a public-service announcement about how to protect against COVID-19. The PSA, released Friday, was shot last week at Nickerson Gardens in South Los Angeles’ Watts district, where Anderson was born and raised.

The video highlighted the impact of the coronavirus crisis on communities of color, and detailed the importance of Angelenos getting tested and doing their part to stop the spread of the virus, from wearing masks to practicing physical distancing and smart hygiene.

The pair also urged to get tested for the virus (more info here), with Nickerson Gardens the site of one of several mobile testing events operated by the Los Angeles Fire Department, the nonprofit organization Community Organized Relief Effort (CORE) co-founded by Sean Penn, and the Curative-Korva lab. The city says the partnership has been able to administer tests to more than 950,000 Angelenos since launching the free program in March in public housing developments and neighborhoods with the greatest need and highest risks, including in the Garment District, Westlake/Pico Union and Van Nuys areas.

Garcetti and Anderson emphasized the need to self-isolate until receiving test results, and to respond to calls from contact tracers.

“I think it’s important we all get tested — in particular the black and brown communities since COVID-19 is affecting us at a disproportionate rate,” said Anderson. “I was happy to be able to help with testing at Nickerson Gardens with Mayor Garcetti since it was where I spent the first five years with my grandmother and my mother and it’s a special place to me.”

The latest comes after Los Angeles County at large confirmed 2,628 new cases of COVID-19 on Thursday, bringing the total to 185,872 positive cases. On Wednesday, the region recorded a single-day-record 4,825 new infections. There are a total of 4,552 deaths as of yesterday.

Check out the PSA above.