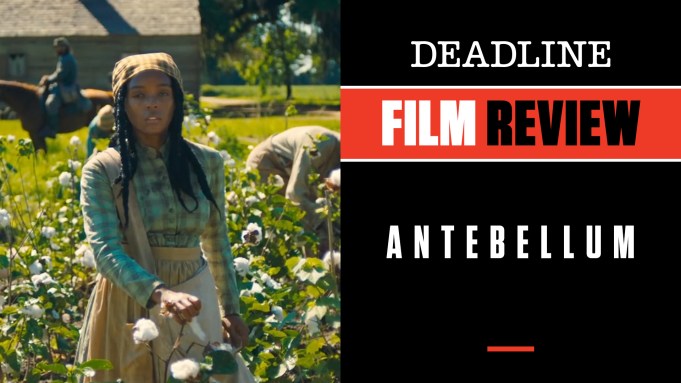 Antebellum is clearly a horror film — of sorts — that tries hard but largely fails to be the socially relevant take on systemic racism that it sets out to be. Jordan Peele set a very high mark for this subgenre with his Oscar-winning Get Out and follow-up Us. Those movies (which came from some of the same producers as this), while eliciting the required chills of the horror genre, also served as pertinent reminders of the rampant systemic racism still existing after 400 years in America, as well as successfully offering a wickedly satirical POV. Antebellum, from the writing and directing team of Gerard Bush and Christopher Renz, takes itself too seriously to pull off its ambitious hybrid of pre-Civil War slavery in the Antebellum South mixed with a contemporary take that is meant to show us sadly how little has changed, despite the widely divergent societal status enjoyed by the dual parts its star gets to play.

Mostly, however, Antebellum is structured in such a confusing manner that it results in a mishmash of messaging despite the best efforts of a game cast including star Janelle Monáe, who still manages to shine not only as Eden, an abused slave on a pre-Civil War era plantation, but also as Veronica, a renowned and whip-smart academic and author in the current day. However, a final-shot twist is so gimmicky that it negates all that went on for the previous two hours and left me feeling hoodwinked by the filmmakers, especially after investing so much time in the plight of these characters.

I could say the film is a combo of 12 Years a Slave (the Steve McQueen Oscar Best Picture winner that is another league, far removed from this one) and [SPOILER ALERT] a certain Emmy-nominated TV series that started life as a feature film, but if I were to name the latter it would signal this film’s final twist immediately and thus I will not do that. In fact, if you want to view this fresh as I had the opportunity to do, then stay away from all reviews including this one and give it the respect of watching without knowledge of where it is going and how it gets there.

The first 40 minutes or so takes place on a sunny Southern plantation, or so it seems as the movie opens with idyllic scenes of white folks romping around the place. The other dynamic though is soon revealed as vicious slave owners like the unnamed man played by Eric Lange, as well as Jack Huston’s Captain Jasper, basically terrorize their slaves including Eden (Monáe), Julia (Kiersey Clemons) and Eli (Tongayi Chirisa).

After scene after scene of their desperate situation we hear a cell phone ringing off screen. That is the cue to switch to a very different world, the current-day life of Veronica Henley (also played by Monáe), an academic who is seen tearing a conservative voice to shreds on a TV talk show. A successful career woman, wife and mother, she sets out on a book tour that includes a night out at a restaurant with her spirited friends including the lively and opinionated Dawn (Gabourey Sidibe, seizing the moment), who takes on a couple of diners with her own biting manner. Also in this section there is a devious woman played to the hilt by Jena Malone, as we see her evil ways rifling through Veronica’s things and basically up to no good. As the dinner ends and the diners part ways with Veronica, we see Veronica kidnapped in a van she thought was her ride back to her hotel. While struggling to get free, the scene again switches back to the plantation and Monáe is back in Eden mode, this time for a final act in which she is no longer the silent slave answering to every whim of her owner.

The directing team is known for its game-changing, socially conscious advertising work but they bite off more than they can chew with this feature film debut. It is not a bad idea to blend a Gone With the Wind-style motif with the down-and-dirty tropes of the horror genre, but the second act excursion to current day is simply off tone, and then the gimmicky ending of the third and final act sinks the whole ship. Actually, this all might have worked as a Twilight Zone episode instead. Perhaps Lionsgate, which sets it loose on VOD today after having initial theatrical release plans KO’d by COVID-19, should have called Peele.

Producers are Zev Foreman, Raymond Mansfield, Sean McKittrick and Lezlie Wills as well as Renz and Bush. Check out my video review above with scenes from the film.

Do you plan to see Antebellum? Let us know what you think.