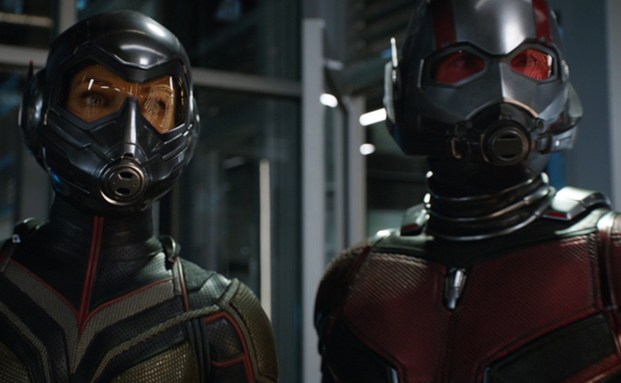 Paul Rudd, Michael Douglas and director Peyton Reed are back for Marvel’s sequel to the 2015 small smash Ant-Man, and this time they have added The Wasp. It’sappropriate in the year of the #MeToo movement because the Wasp is the first female character featured in a Marvel title to make it to the movies.

With Evangeline Lilly again taking on that role, the alter ego of Hope Van Dyne, there is much more for her to do this time. For Ant-Man and the Wasp, she joins Ant-Man (aka Scott Lang) in a quest to enter the Quantum Realm, that subatomic world beyond our own where she and her father, Dr. Hank Pym (Douglas) — the original Ant-Man, by the way — believe their beloved missing wife and mother, Janet Van Dyne (Michelle Pfeiffer, joining the cast) aka the original Wasp is still alive and has been stuck there in limbo for decades after performing a heroic act. Of course things aren’t always so simple in these Marvel films, but this one isn’t concerned with finding some villain aiming to take over the Universe but more into the jokes and the lighter elements in which this truly comic book movie trades.

As I say in my video review (click the link above) it helps to have an actor best known for comedy like Rudd taking the lead here. The first picture took in half a billion worldwide, but its domestic total didn’t even match the first weekend of many other Marvel enterprises, so don’t put that kind of pressure on it. This is perfect summertime sit-back-and-relax entertainment. We’ve already had two Earth-shattering, franchise-changing mega hits in the MCU in 2018 with Black Panther and Avengers: Infinity War, but with the fun ant–ics of this one, there is no worry about burnout. Rudd and company march to their own rhythm.

Since the first film we saw Ant-Man again, on his own, in Captain America: Civil War, and the plot mechanisms put in motion there for the character quickly are explained away here. As it starts, he is under house arrest and avoiding engagement with the suit, devised by Pym, that miniaturizes him and gives him unique superpowers. Lang is more concerned with being a father to Cassie (Abby Ryder Fortson) and keeping a semblance of family together, even with his ex (Judy Greer) and the man in her life now, Paxton (Bobby Cannavale). Of course complications arise with bad guy Sonny Burch (Walton Goggins), who is desperate to get his hands on Hank’s technology in order to make billions; that includes the office building headquarters (with all the secrets), which is able to be miniaturized and carried around like a briefcase. There is a lot of playing with size in this edition as Ant-Man also can turn into Giant-Man on a moment’s notice, which certainly can come in handy.

There is also another somewhat dark force in the form of Ava aka Ghost (Hannah John-Kamen), who isn’t out to use her ghostly presence to change the world, only her own life. In this sense, Marvel has a truly self-possessed villainous figure on its hands.

But back to the jokes, of which there are plenty with Rudd returning as a writer, along with a new quartet including Chris McKenna & Erik Sommers, Andrew Barrer & Gabriel Ferrari. Getting lots of comic mileage are Lang’s former partners in petty crimem, who now are setting themselves up as a security team led by a very funny Michael Pena as Luis (his “truth serum” monologue putting his words into the mouths of others is classic) and joined by David Dastmalchian as Kurt and Tip “T.I.” Harris as Dave. Laurence Fishburne is also around as Bill Foster, a colleague of Pym’s, and so is FBI agent Jimmy Woo (Randall Park).

Disney has asked critics to keep the twists and turns to ourselves, and I have no problem with that, as plot-wise there isn’t a whole lot of urgency anyway. Fun is the operative word and this is more character-driven, with nice interplay between Ant-Man and sidekick the Wasp, who kind of comes off like a tough-as-nails Tinker Bell when she’s flying around. The worker ants are a real kick to watch too. Of course the special effects are aces, and there’s lots of action along the way.

Without giving anything away, just be aware that if you leave when the end credits roll, you lose — but then you already knew that Marvel movies often save the best for last. Producers are Kevin Feige and Stephen Broussard. Disney opens it Friday, hoping that the Fourth of July’s fireworks continue on screen through the weekend.

Do you plan to see Ant-Man and the Wasp? Let us know what you think.