Continue to Deadline SKIP AD
You will be redirected back to your article in seconds
Skip to main content
June 25, 2020 11:36am 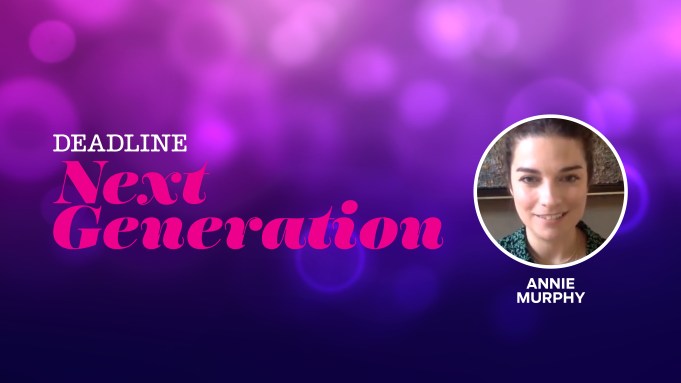 Annie Murphy has spent the last six years playing fallen socialite Alexis Rose in CBC and Pop TV’s Schitt’s Creek. In Deadline’s Next Generation TV video series, the actor discusses how she got the role; missing the show, which ended in April; moving on to AMC’s Kevin Can F*** Himself; and her ambitions to do period drama.

She says that the role of Alexis Rose was “life changing.” “My life was a barrel of laughs; I hadn’t worked in about two years, my apartment in Toronto burned down and I had very little money in the bank,” she said. “I had my very first screen test in L.A. and I sh*t the bed. I thought, this is it, a glaringly obvious statement from the universe being like ‘Hun, you’ve got to do something else.’ I decided I wasn’t going to act anymore. Literally the next day, I got the audition and I went in and was stoked because Eugene Levy and Catherine O’Hara are my idols.”

Co-created by Daniel and Eugene Levy, the comedy stars the foursome as the once-wealthy and self-absorbed Rose family, who are reduced to living in a motel in the awkwardly named town they once bought on a whim.

“I’m missing everybody a lot. I think when we were shooting the last season, I didn’t let myself think about it too much because I didn’t want to be a hysterical pile of mucus on the ground everyday so I pushed it away. But when I watched the last episode, it hit me that it was done and especially with [COVID-19], I’ve felt a real Schitt’s Creek hole in my life,” she adds. “It’s strange to think that the last six years were the best six years of my entire life. It’s weird to be on to a new chapter.”

That new chapter is Kevin Can F*** Himself, a dark comedy for AMC, where she plays sitcom wife Allison. It looks to break television convention and ask what the world looks like through her eyes. Alternating between single-camera realism and multi-camera comedy, the formats will inform one another as we imagine what happens when the sitcom wife escapes her confines, and takes the lead in her own life.

“From sh*t to f*ck, I feel like I graduated in a way when it comes to swear words. It’s very meta. It’s from the perspective of a sitcom wife who has much higher hopes and dreams than she’s living. I get to have a Boston accent and it’s night and day from Alexis. I’m sh*tting my pants but I’m really excited to get going on something,” she adds.

Elsewhere, the Ontario-born Murphy says that she’d love to find a period drama with bonnets and frocks. “I started out in theater, I was doing Shakespeare and was in Oliver Twist, that has always appealed to me because I feel if done well you get to time travel yourself and I’d love to do that. I’m open for business.”