Continue to Deadline SKIP AD
You will be redirected back to your article in seconds
Skip to main content
July 6, 2021 1:45pm 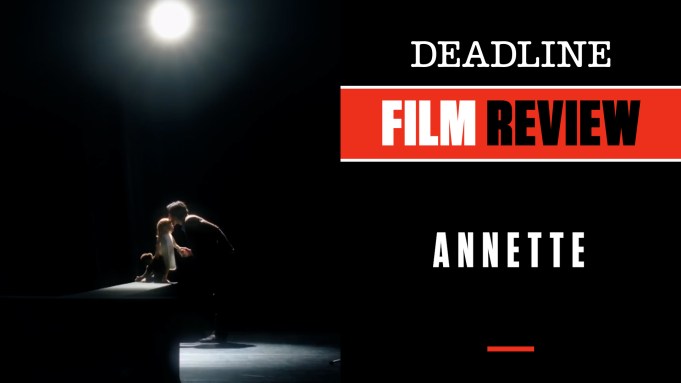 Tonight’s Cannes Film Festival world premiere of Leos Carax’s musical rock opera Annette has been a long time coming as it was actually announced to be part of the fest’s 2020 edition. That was canceled, of course, but this film decided to wait 14 months until it could have its moment on the red carpeted steps of the Grand Theatre Lumiere, and I have to say that, quirky as it is, the wait was worth it.

A Competition entry, Carax has infused this musical fantasy dreamed up by brothers Ron and Russell Mael (better known as the creative geniuses behind Sparks) with a richly vibrant and offbeat spirit that might be an acquired taste but one well worth acquiring. I actually am glad the film was delayed as it turns out seeing the new documentary The Sparks Brothers, which opened last month, is a great primer to enjoying and appreciating Annette. The Mael brothers, deeply admired by music industry heavyweights over the past 50 years and with a devoted fan following despite not being as well known to the masses, are not easily categorized and neither is their ever-evolving music.

But they always have wanted to break into the movies, their videos proving their visual chops, and despite past attempts with the late great French filmmaker Jacques Tati, as well as a never-completed project with Tim Burton, this collaboration with Carax — whose previous films like Holy Motors and earlier works have shown his own promise as a director who would be comfortable taking on the musical form — seems like the perfect marriage.

A musical fantasia in the form of a sorta-rock opera, with most of the dialogue sung a la movies like Tommy and The Umbrellas of Cherbourg (the latter a prime influence for the more accessible La La Land), Annette takes on its own distinct rhythms with elements of everything from A Star Is Born to Moulin Rouge to Bjork’s Dancer in the Dark, but it defiantly marches to its own beat. Carax’s films always have had scenes that feel like the characters could pop into musical numbers at any minute, but big, choreographed set pieces are not what the darker and dramatic Annette is all about.

Starting off strongly with its ensemble including stars Adam Driver, Marion Cotillard and Simon Helberg along with even the Mael brothers themselves marching through the streets of downtown L.A. singing a prelude to what is to come “So May We Start,” Carax — working in the English language this time — gets this showbiz romance off to a blistering beginning with one of its best songs. What follows is the story of Henry (Driver), a stand-up comic whose performance art gets so edgy and politically incorrect that the audience regularly turns on him like a Greek chorus crooning their disapproval. Meanwhile, he has embarked on a new romance with Ann (Cotillard), a world-renowned opera singer he recently has met. Their relationship heats up, as shown in sexy interludes and perhaps the signature song on the soundtrack, “We Love Each Other So Much.” It all leads to marriage, the birth of their child Annette, and trouble down the road as her career soars and his falters as he can’t control his worst impulses onstage.

Then there is the matter of the child, an ethereal presence who is anything but normal looking as she begins to develop (a puppet shares the role with human Devyn McDowell). A showbiz show reports on the couple’s progress from now and then, but it all leads to a surreal outing on a boat where violently crashing waves and a confrontation between Henry and Ann leads to tragedy and a new chapter for Henry. He takes charge by exploiting Annette’s angelic, puppet-like persona, taking her on a world tour of arenas where the young girl is hoisted above the crowd and adored like the second coming. As in any opera, the action just keeps intensifying and building. Carax himself, in an interview with Deadline today, describes the film as a “musical fantasy with some comedy, love and sex, a monster, a child, and a few corpses.” It is more than that.

There is no question this all could have worked onstage, perhaps in the form of a touring concert, but Carax’s unique visual style is a perfect complement to the wildly inventive creation of the Mael brothers. It is the kind of marriage between music and film that either works or falls flat on its face. Fortunately they have Driver, who jumps into this role with complete abandon — whether as a stand-up comic, singing or as a troubled and failing husband, father and human being on a continuing downward spiral like Norman Maine. It is a rich role requiring an actor to walk a tenuous tightrope, but he never falters.

Cotillard could have been a silent-film star — her expressive face says it all, and she brings a certain poignancy to Ann. Helberg nearly steals the film, particularly in a sequence where he is conducting the orchestra while reeling off dialogue, turning it all into a thrilling musical sequence, the film’s highlight for me. The production values are first rate.

Producers are Charles Gillibert, Paul-Dominque Vacharasinthu and Driver. Check out my video review with scenes from the film at the link above. Amazon opens domestically in theaters on August 6 and begins streaming on August 20.

Do you plan to see Annette? Let us know what you think.