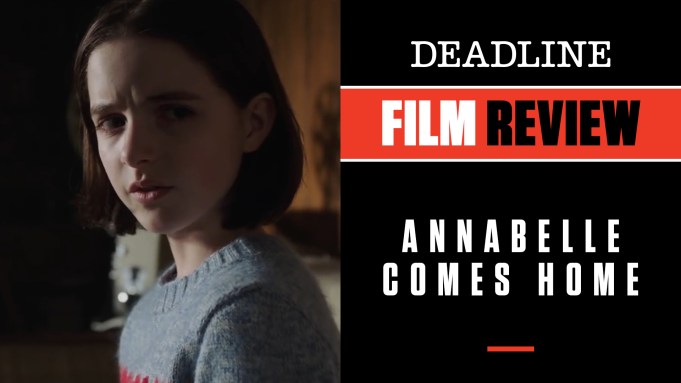 Hollywood has certainly hit the valley of the dolls lately. First we had the sublime Toy Story 4 (featuring four scary ventriloquist dummies among others) and Child’s Play, the seventh iteration of the demonic Chucky doll movies, both opening over the weekend. Now we have Annabelle Comes Home, the latest edition of Warner Bros’ enormously successful Conjuring universe and the third in the Annabelle series. Annabelle, like Chucky, is another demonic doll who wreaks havoc wherever she goes. Unlike Chucky, though, she doesn’t talk, or for that matter move at all, or for that matter do anything physical other than look creepy. She does however seemingly have the ability to unleash demons including one known as The Ferryman in this edition.

Annabelle first hit the Conjuring universe in 2014, then again with Annabelle: Creation two years ago, and now has a completely new cast to terrorize. The filmmakers — notably James Wan, who produces this one with Peter Safran — have merged the doll with the key players from the original Conjuring movies, Ed and Lorraine Warren (once again played by Patrick Wilson and Vera Farmiga), but relegated them mostly to slightly larger than cameo supporting roles this time. They are the true-life famous demonologists who specialize in all sorts of spooky spiritual world happenings, and are given possession of Annabelle to lock up in their personal home museum of artifacts that have played a part in various mysterious hauntings from the past.

As we see right from the beginning on their road trip back home with Annabelle sitting in the back seat, things just always seem to go awry  whenever she’s around. Fortunately they get her home before she can do too much damage other than summoning the dead from a cemetery near where the Warrens’ car breaks down (of course). They lock her up in a glass-walled case, blessed by a priest and featuring a display with a sign that says “Warning. Do Not Open” — a dead giveaway if ever there was one and clearly an invitation to do just that for one unsuspecting visitor.

Cue the Warrens’ exit as the film is then essentially handed over to the teen set, with Mary Ellen (Madison Iseman) bringing along her friend Daniela (Katie Sarife) to help babysit 10-year-old Judy Warren (McKenna Grace), whose birthday they will be celebrating a little early. The young Warren knows better than to violate her parents’ warnings, but Daniela has other ideas as she is determined to mine the home for the opportunity to somehow connect with the ghost of her dead father. This leads her into the artifact room as she steals a key that leads to that forbidden Annabelle display. Although she is soon scared off by weird goings-on, it is too late and Annabelle is unleashed, her very presence enough to cause all the other artifacts to come to frightening life once more. Yes, all hell breaks loose, but then you knew that.

What is really impressive to me is how much mileage these filmmakers, including director-writer Gary Dauberman, get out of this doll that simply exists, preferring to let others do all her dirty work. Imagine what they save on special effects with this inanimate movie star? Nevertheless, the film is carried on the shoulders of its screaming cast, particularly the talented Grace who has a real screen presence. Iseman and Sarife do what is required, and there’s some comic relief from Michael Cimino (not the late director of The Deer Hunter) as a teen boy awkwardly demonstrating a crush on Mary Ellen.

If you were on board for the first two installments of the Annabelle (so far) trilogy, you will probably be on board this one as well which does a serviceable job keeping this doll in business.  Warner Bros unleashes her wrath Friday.

Check out my video review above which also includes scenes from the movie. Do you plan to see Annabelle Comes Home? Let us know what you think.