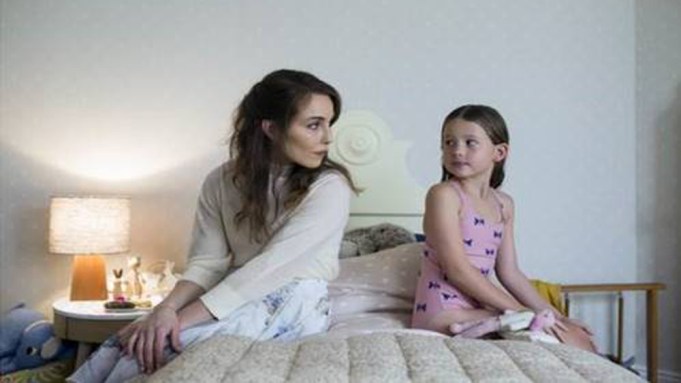 “You have no idea what it’s like to lose a child.”

In Angel of Mine, a grieving and unraveling mother who lost her infant daughter years earlier sees a young girl at a neighbor’s party and starts to believe it’s her own. This as the woman is about to lose custody of her son and, apparently, is off her meds. Watch the first trailer for Lionsgate’s taut drama starring The Girl with the Dragon Tattoo‘s Noomi Rapace above.

Lizzie (Rapace), who we learn “was committed for almost a year,” is barely keeping it together. And now “she is stalking our family,” says the girl’s mom (Yvonne Strahovski, The Handmaid’s Tale). She’s right, and harrowing scenes of obsession, uncertainly and genuine terror ensue.

Luke Evans and Richard Roxburgh also star in the R-rated thriller directed by Kim Farrant from a script by  Luke Davies (Lion) and David Regal. Brian Etting, Josh Etting and Su Armstron are the producers.

Lionsgate opens Angel of Mine, which is based on the 2008 French film L’Empreinte De L’Ange, day-and-date on August 30. Check out the trailer above, and tell us what you think.