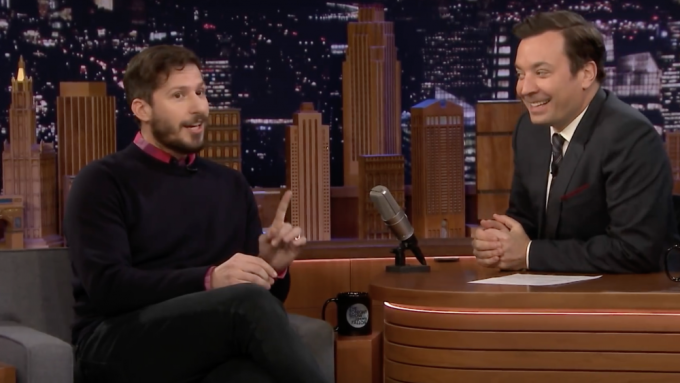 The existential comedy Palm Springs directed by Max Barbakow made history at Sundance when NEON and Hulu acquired the rights for $17,500,000.69, surpassing Fox Searchlight’s 2016 acquisition of The Birth of a Nation which went for $17.5 million. Andy Samberg, who stars and is a producer of the film shared the story in how Palm Springs broke the Sundance record — by 69 cents.

During an appearance on The Tonight Show, Samberg told host Jimmy Fallon about the process of how bidding works at Sundance. When he and the producers received an offer that matched the record-high, he said, “We should ask to throw a dollar more to make it the highest sale ever.”

His fellow producer and Lonely Island cohort Akiva Schaffer said that they should add 69 cents more to which Samberg responded, “Yes, that’s right…we should do that.”

He added, “We shattered the record by 69 whole cents.”

Deadline exclusively reported that NEON and Hulu were acquiring Palm Springs at Sundance — but later learned that the film was worth substantially more. There was a heated bidding war and the value of the deal was actually closer to $22 million, which is more than the biggest Sundance deal of all-time.

Palm Springs was written by Andy Siara and follows carefree Nyles (Samberg) and reluctant maid of honor Sarah (Cristin Milioti) as they have a chance encounter at a Palm Springs wedding. Things get complicated when are unable to escape the venue, themselves, or each other.