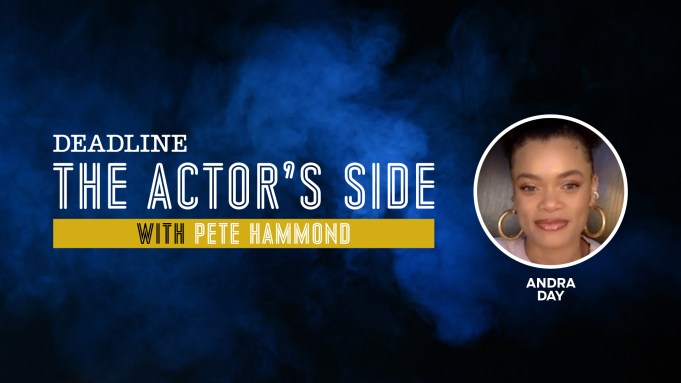 The end of this very long, and very unusual movie awards season is upon us. Final voting for the Oscars begins Thursday, and among those names on the Best Actress ballot is a first-time film actress, Andra Day, for her exceptional work playing Billie Holiday as she fights the government in director Lee Daniels’ The United States vs. Billie Holiday.

Impressively, she already has picked up the Golden Globe for Best Actress in a Drama as well as this rare Oscar nomination for a film debut. To be technical, this isn’t Day’s movie debut — you might not recall that she played Sweet Tea in Pixar’s animated Cars 3. But that role clearly didn’t prepare her for the opportunity to play iconic singer Holiday, after whom she is stage-named — in a way. So was it fate that she changed her real name to a bit of an homage to Lady Day and shortened her first name, Cassandra, to simply Andra, and instead of Andra Holiday shortened the last name to simply “Day”? Seems like, despite her fears of taking on the role, it was pre-destined to happen.

I have found that there is no one more fun to talk to than Andra Day, and for that reason I am happy to make her my guest on the last edition of my Deadline video series, The Actor’s Side, for this Oscar-season series of 14 episodes (a new season for Emmy contenders starts May 5 with a great lineup).

‘The United States Vs. Billie Holiday’s Andra Day On How Playing A Cultural Icon Inspired Her To Give Voice To The Suppressed – Contenders Film: The Nominees

In our conversation, she talks about what all the awards recognition means, particularly following in the footsteps of previous Oscar- and Tony-nominated performances of stars playing Holiday — Diana Ross in Lady Sings the Blues and Audra McDonald on Broadway, respectively. As for following Ross’ unforgettable turn as Holiday nearly a half-century ago, Day stresses that the new film is more specific to a particular stressful time in the singer’s life and that she felt “insulated, and cared for, almost protected” by Ross in playing it. (Coincidentally, Ross’ son, Evan, has a role in the film).

Day suggests that there could be 10 different movies focusing on Billie and tells me exactly what the storyline could be for a few of those ideas. She talks about her first memories of Holiday when she was just 11 years old, her impact on her career as a singer, the meaning the song “Strange Fruit” had for her, the phenomenon of singers becoming actors, plus the “method” approach she took in creating her first movie role. (“But no, I didn’t go so far as to do heroin,” she says.) Day also discusses her first experience with the Oscars when she appeared with Common on the show to sing “Stand Up for Something,” a nominated song from 2017’s Marshall, and she tells me why she resisted seeing her work in this film until the very last minute, when she asked for a screening on the night before it was released. To watch our conversation and to get “the Actor’s Side” from Andra Day, just click on the link above.